Jump (back) into World of Warcraft for free this weekend 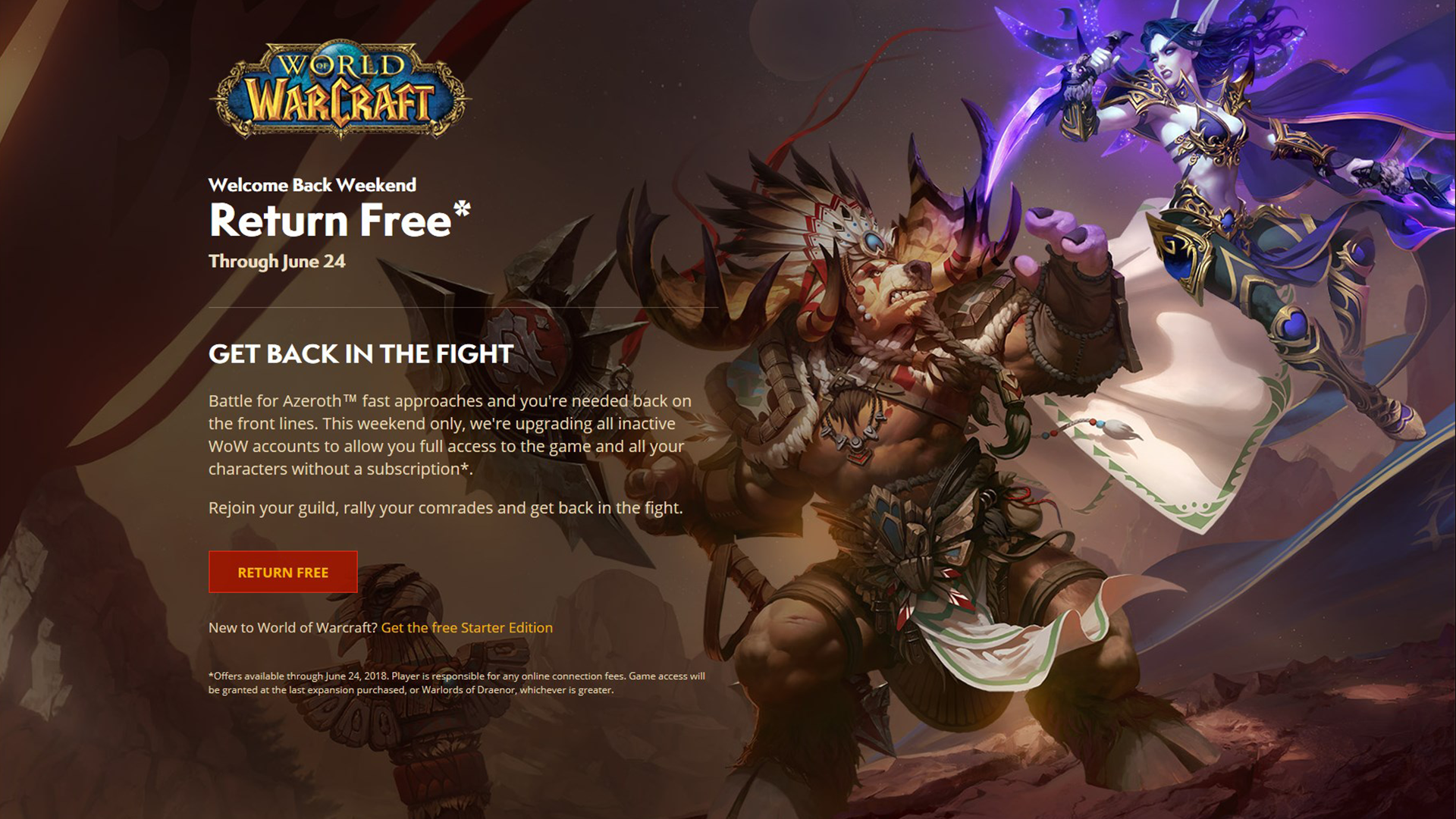 The Battle for Azeroth is slowly fading into sight. As the venerable World of Warcraft prepares to receive its seventh expansion, Blizzard are hoping to rope lapsed players back in with a free weekend from now till Sunday, 24 June 2018. It grants “full access to the game and all your characters,” with all content up to Warlords of Draenor (5th) unlocked.

This is a great chance to tour the MMO if you’ve been away for some time. To get started, you’ll need the Battle.net desktop app installed – it’s a requirement for all modern Blizzard games, anyway. From there, you’ll just have to log-in and install or update World of Warcraft.

Should the whole dipping-your-toes-back-in experiment succeed, you might want to consider pre-ordering Battle for Azeroth. Doing so gives you the Legion expansion (sixth) and a level 110 character boost, so you’ll be on equal starting ground with friends new and old. Services such as character transfers, faction changes, name changes, and more are also on a limited-time sale.

Battle for Azeroth “reignites the conflict at the heart of the Warcraft saga” now that the Burning Legion have been reduced to dying embers (for now, at least). Horde players will get to visit the trolls of Zandalar to recruit their naval fleets, while the Alliance sets sail for Kul Tiras, Jaina Proudmoore’s home, to bolster their forces. Whether its covert infiltrations or upfront warfare, open faction hostilities is the name of the game. New modes include the 3v3 Island Expeditions and 20-player co-op Warfronts, with Azerite and the Heart of Azeroth being new tools to play around with.

World of Warcraft: Battle for Azeroth releases for PC and Mac on 14 August.

Ade thinks there's nothing quite like a good game and a snug headcrab. He grew up with HIDEO KOJIMA's Metal Gear Solid, lives for RPGs, and is waiting for light guns to make their comeback.
Previous post Review – Little Witch Academia: Chamber of Time does justice to the source material
Next post Review – Go behind the scope once more with Hitman: Sniper Assassin