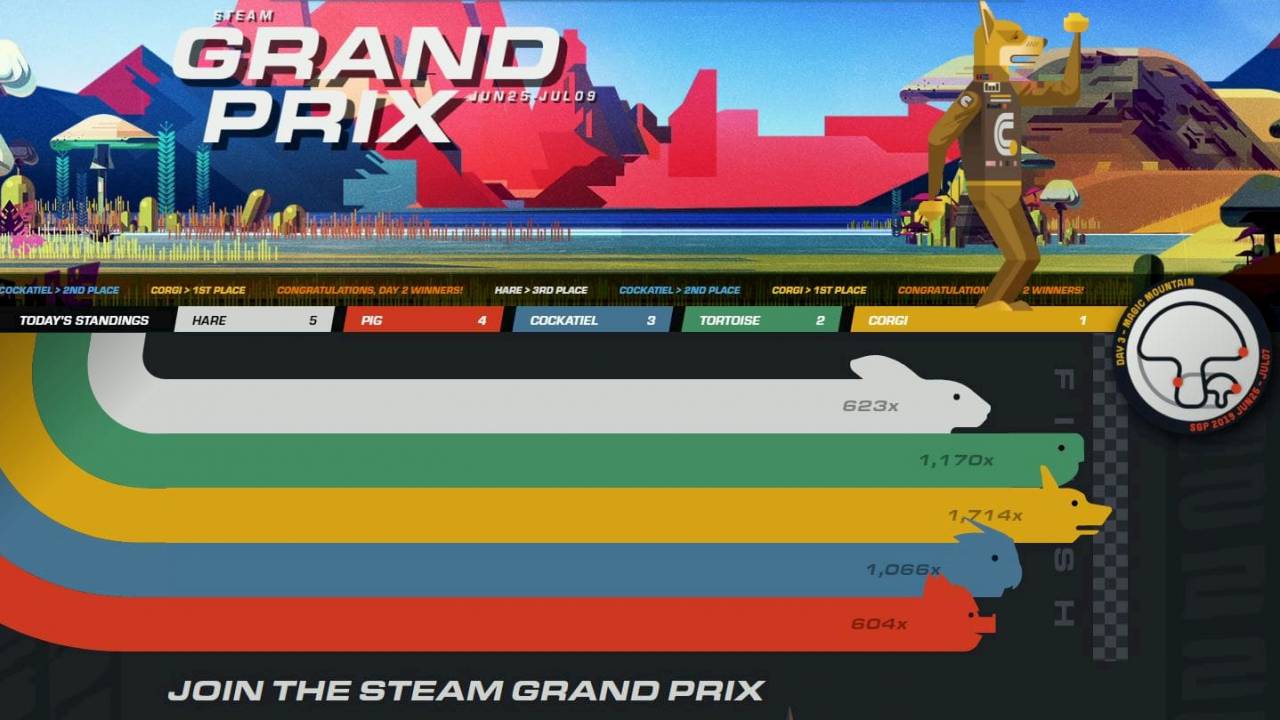 In our world, there are many things that amaze and baffle us…some more so than others.

Take Stonehenge, the rock formation which has tickled scholars for centuries over the secret of its construction.

And then there’s the Steam Summer Sale Grand Prix, which confused literally everyone who uses the platform.

Way to hammer out a punchline.

Indeed, and it was totally worth it.

Anyway, that’s not the main piece of news. In order to “apologise” for the confusing event, Valve announced that a total of 5,000 randomly picked players from the teams: Corgi, Hare, Tortoise, Cockatiel and Pig, will receive their top wishlist item for free.

The confusion stirred by the event didn’t just mislead players; even developers started to sweat over concerns that users would cut back their wishlists because of the event.

TL; DR: it was an absolute mess.

Suffice to say the event blew up in everybody’s face. Mostly Valve’s though.

To be fair, it’s not like the folks at Valve didn’t try to straighten out the lines. But by then, the problem was identifying the lines to begin with.

For all intents and purposes, Valve’s efforts to salvage the Grand Prix didn’t do much since most people had already thrown in the towel. As such, the event concluded just as it had begun, with Team Corgi’s stubby legs and bread-like behinds taking an easy win. Woof.

In any case, it’s good that Valve intends to make amends – lest competitor Epic put another one over them. As far as they’re concerned, this poorly-executed event really did a number on Steam’s popularity, and they can’t risk losing any more ground to the Epic Store – not with the holiday season approaching.

Kenneth is your dedicated jack of all trades gamer and borderline anime nut. When not writing, he likes to wind down with Overwatch, Apex Legends and a bit of Fate: Grand Order on the side.
Previous post Gearbox drops more Borderlands 3 info at Guardian Con!
Next post Total War: Three Kingdoms asks a simple question: Why can’t we be friends?