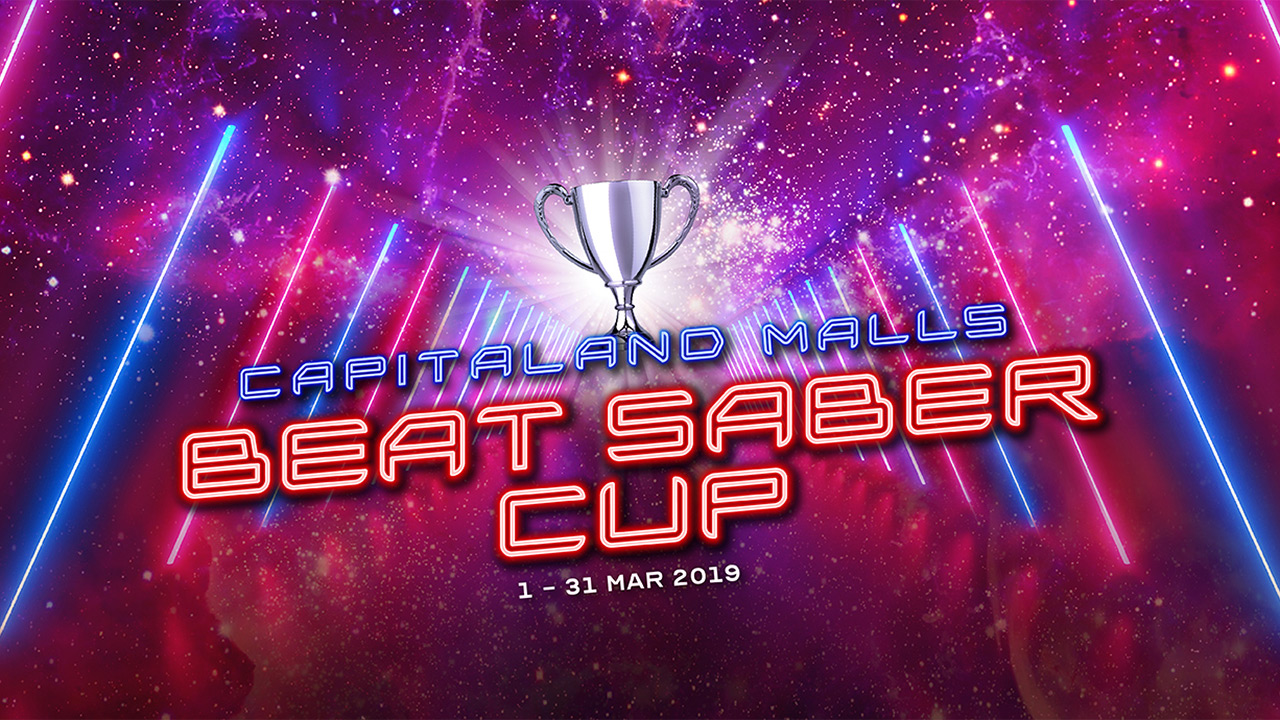 Time for a workout. A month-long Beat Saber competition is kicking off across 14 CapitaLand malls in Singapore next month. Running from March 1-31, contestants stand to win a total of S$35,000 in STAR$ and prizes for taking on the virtual reality rhythm game.

This might seem late to the party but the tournaments herald Beat Saber’s regional launch on the PS4. You might think this would be a PlayStation initiative, but CapitaLand’s head of retail management, Teresa Teow, assures that this is very much their thing after what had been months of planning.

“As virtual reality and competitive gaming take off among consumers, we aim to be among the first to bring these elements into our malls and create an immersive and memorable play experience for our shoppers,” said Teow in a news release.

Beat Saber exploded as the poster child for VR gaming in 2018. First available on PC, players use motion controllers and a virtual reality headset for what amounts to a Dance Dance Revolution with lightsabers. In-game, each controller represents a blue or red-colored saber, which the player must use to cut incoming blocks synchronized to the beat.

You can’t just feebly swing at them, though. Some blocks have an arrow to indicate which direction you should slash, while some are mines you should completely avoid. Points are awarded based on your accuracy and swings. Beat Saber swiftly became a hit after its PC release, not just for how fun or challenging it can get, but for also allowing custom songs and beatmaps.

It really needs to be seen in action, and what better example than Singapore’s very own national anthem: I present to you, Beat Saber with Majulah Singapura (hat-tip to Reddit).

Here’s where and when you can virtually slice and dice your way to the top of the leaderboards: 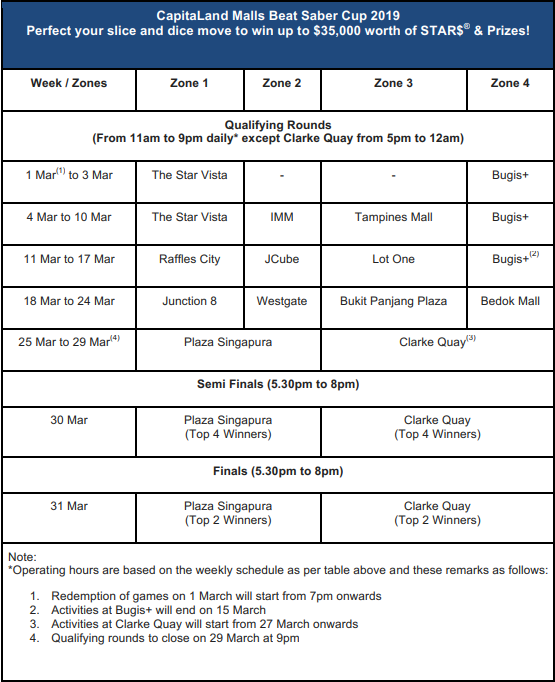 For their efforts, those dexterous Top 8 will be awarded the following:

STAR$ are membership points issued by CapitaLand, used to redeem exclusive deals and vouchers through their app. You may also redeem physical CapitaVouchers for use at their malls, with 50,000 STAR$ transmuting into a S$50 CapitaVoucher. Use it to offset a PlayStation VR purchase, perhaps?

Even if you don’t want to commit to the long-haul, CapitaLand are giving out physical prizes to the daily top scorer. Head on down to Bugis+ and Clarke Quay if you want to compete for a Razer Nari Ultimate wireless headset (cool haptics-enabled headphones worth S$309.90), or to any of the other participating malls for either a Razer Nari Essential headset (S$159.90) or the Razer Kraken Tournament Edition headset (S$159.90).

Other mall activities include ‘Geolocation Weekend Matches’ and a ‘Beat The Score Challenge’. The first simply pits you in a real-time challenge against an opponent elsewhere in the country, while the second (S$20 minimum spend or 100 STAR$ redemption required) only takes place during the final three days of Beat Saber Cup 2019. Times and venues below: 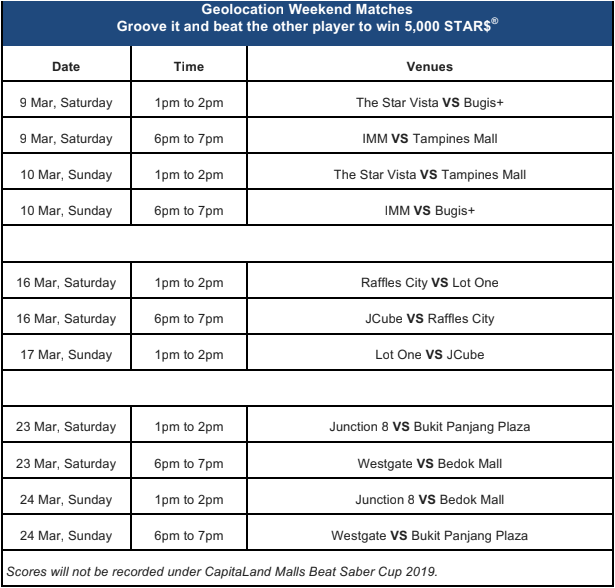 I’ve read once that tired kids make for well-behaved kids, which makes this all seem like a good March school holiday distraction.

You can play Beat Saber in the privacy of your own home right now on PC, or later this year on PS4. 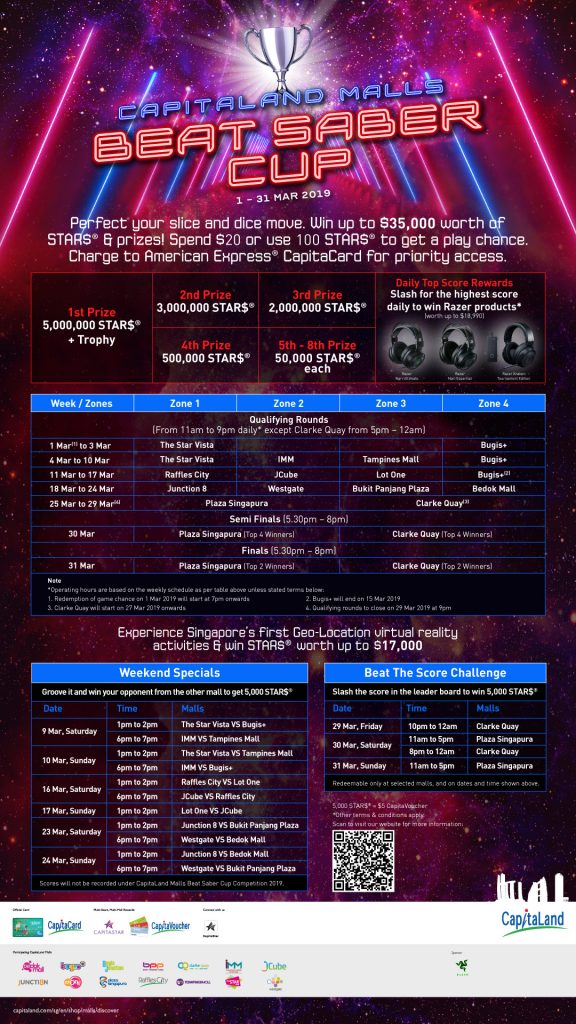 Ade thinks there's nothing quite like a good game and a snug headcrab. He grew up with HIDEO KOJIMA's Metal Gear Solid, lives for RPGs, and is waiting for light guns to make their comeback.
Previous post Rumour: Next-gen Xbox will be announced at E3 2019
Next post Review: Dell G7 15 (2018) a strong choice for the budget laptop gamer