Home / Breaking News / Anthem will be getting a movie prequel!

Anthem will be getting a movie prequel!

Make sure to check your inbox, because BioWare will supposedly release a groundbreaking announcement at 10PM SGT tonight!

If you ask me, I think it might be regarding cross-platform play for Anthem, since it seems every other game is jumping on the train too. I do hope it’s a lot more substantial than that, though. We’ll update this post as soon as the news lands, so stay tuned!

The announcement is out, and it’s certainly big news.

Apparently, EA and BioWare will be collaborating with director Neill Blomkamp to create an Anthem-inspired movie called Conviction. Blomkamp is no stranger to the sci-fi genre, having previously directed movies like District 9, Elysium and Chappie. It will reportedly be a live-action film and is set decades before the events of the game, making it a prequel of sorts. 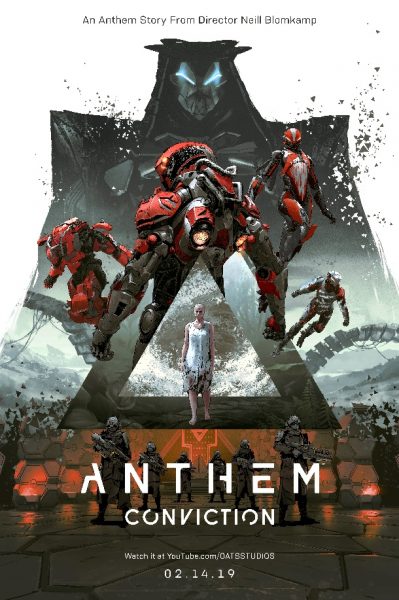 “I was really blown away by this incredible world BioWare created the very first time I saw Anthem,” said Neill Blomkamp. “Conviction sets the stage with a narrative that touches on Anthem’s beautiful and immersive world, which is ripe for exploration by these powerful Javelins. A world where danger is lurking on every ledge and in each valley.”

I’ll be honest: the movie announcement caught me off-guard. While Anthem doesn’t exactly have an impressive track record after their messy release schedule, I’m still pretty hyped for the short film.

Conviction premieres on Valentine’s morning at 7:30AM.

Kenneth is your dedicated jack of all trades gamer and borderline anime nut. When not writing, he likes to wind down with Overwatch, Apex Legends and a bit of Fate: Grand Order on the side.
Previous post Rumor: Are we getting a new Monster Hunter title next month?
Next post Preview: Far Cry New Dawn better be saving its best moments for later