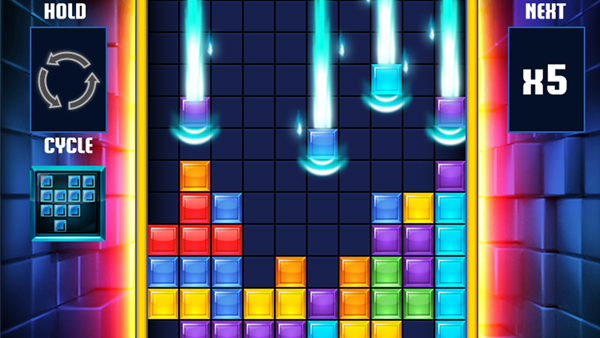 EA Mobile announced the launch of Tetris Blitz yesterday, the freemium app which puts a “new twist to an iconic game.” Whatever they dunked the 29-year-old franchise into must have been made of energy drinks and candy because the game is now fast, flashy and, surprisingly, addictive too.

Taking a few cues from popular casual games, Tetris Blitz gives players just two minutes to get a brag-worthy score for the leaderboards. You do so by clearing lines like you’ve always done, but this time with some help.

The first thing anyone will notice is the highlighted spots where the next tetromino can land. Tap one of them and the floating tetromino will come crashing down in a trail of flame and lightning (well, no, without the awesome trail). Don’t be fooled into thinking this makes the game easier – they just make the decision-making faster. Trust me, that timer will hit zero before you know it.

Purveyors of precision will be pleased to know that you can still manually place the tetromino, using a Drag-and-Place mechanic that removes the uncertainty involved with a touch screen. Once a line is cleared, any blocks above will drop down to fill the gaps, in turn clearing more lines should there be any. Keep those going and you’ll eventually trigger the coveted Frenzy Mode, doubling all points earned.

If that wasn’t enough, players get to pick power-ups and finishers (if any) to help them in the game. These power-ups will charge a random tetromino that, once cleared, will come into effect. These range from lasers that obliterate entire lines to a magnet that pulls all blocks to the left. Finishers include “Mino Rain”, which floods the stage with blocks to form lines for a huge point boost.

If you guessed that’s where the “freemium” part comes in then you’re right – power-ups and boosts need to be purchased with coins, which run out faster than you can earn them. These coins can be bought in different amounts of course, a model familiar to most by now. Annoyingly, prices aren’t listed so you do have to tap on it first to check.

Tetris Blitz is the sort of game that, really, should be discovered by playing and not reading. Put in about ten to fifteen minutes before you decide to like it or not, as you’ll get to fully use power-ups and finishers by then. I think the mix of score-chaser, nostalgia and great presentation all round easily make this worth checking out.

Don’t worry original Tetris, you’ll always have a place in my heart.

Get it from Google Play or the Apple App Store.

Ade thinks there's nothing quite like a good game and a snug headcrab. He grew up with HIDEO KOJIMA's Metal Gear Solid, lives for RPGs, and is waiting for light guns to make their comeback.
Previous post Will-Nots and Can't-Dos: The Caveats of the Xbox One
Next post World of Tanks: TAM Open Season Finals Summary