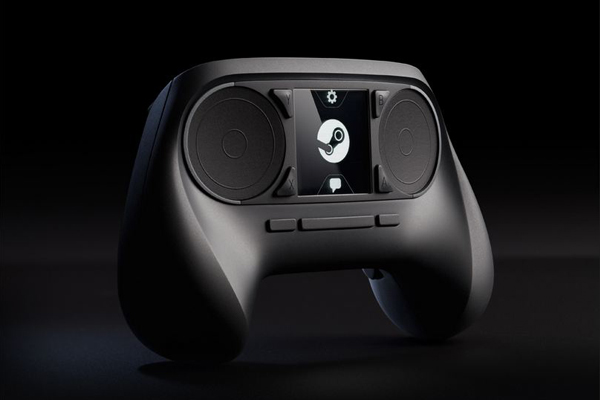 True to their word, Valve does have a new form of input for their push into the living room: the Steam controller. This bizarre looking device swaps out the iconic analogue sticks for trackpads with haptic feedback and a touchscreen in the middle, surrounded by four face buttons. It also packs four shoulder triggers and two rear buttons, and just like Steam Machines, it will be fully open to community design changes.

The need for a new controller lies in the fact that Valve needed one that was compatible with their catalogue of PC games, many of which do not have native controller support. They claim that these trackpads offer a higher input resolution than traditional sticks do, offering a “superior performance” that could act as an alternative to the precision that keyboard and mouse offers. It’ll also come with a configuration tool for users to share bindings of their favourite games, so less time editing and more time gaming.

To counter the lack of physicality, the controller comes with a pair of actuators to provide haptic feedback. “These small, strong, weighted electro-magnets are attached to each of the dual trackpads. They are capable of delivering a wide range of force and vibration, allowing precise control over frequency, amplitude, and direction of movement.” Valve says these can deliver information such as speed, boundaries, thresholds, textures, action confirmations and more. They can even function as speakers if need be.

As with Steam Machines, these will come with the 300 hardware prototypes sent out later this year. These controllers are also completely optional, so if you find that the good old keyboard and mice duo performs better for certain games then by all means use those.

This time, a number of people have already tried out the prototype. Tommy Refenes of Super Meat Boy fame gave a lengthy impressions post on his Tumblr, concluding that it’s a great start that needed some improvements, but could play any game he wanted just fine.

If you’ve ever used Steam’s Big Picture Mode while hooked up to a large TV then you would know that a bunch of games are just perfect on it, especially third-person games. Rather than invest in a pricey wireless gaming keyboard and mouse, the Steam Controller offers a cheaper compromise that, most importantly, works with every game in your library. Compared to SteamOS and Steam Machines, this is the only announcement so far that raises a considerable degree of scepticism, but Valve has a great track-record so far despite rocky starts. If this pulls off, we’ll have the biggest design change for controllers in years.

Does the Steam Controller look like a viable accessory to you, or will you stick with what we already have?

Ade thinks there's nothing quite like a good game and a snug headcrab. He grew up with HIDEO KOJIMA's Metal Gear Solid, lives for RPGs, and is waiting for light guns to make their comeback.
Previous post Review: Grand Theft Auto V (PS3)
Next post Kickstarter delays are “really healthy” for everyone