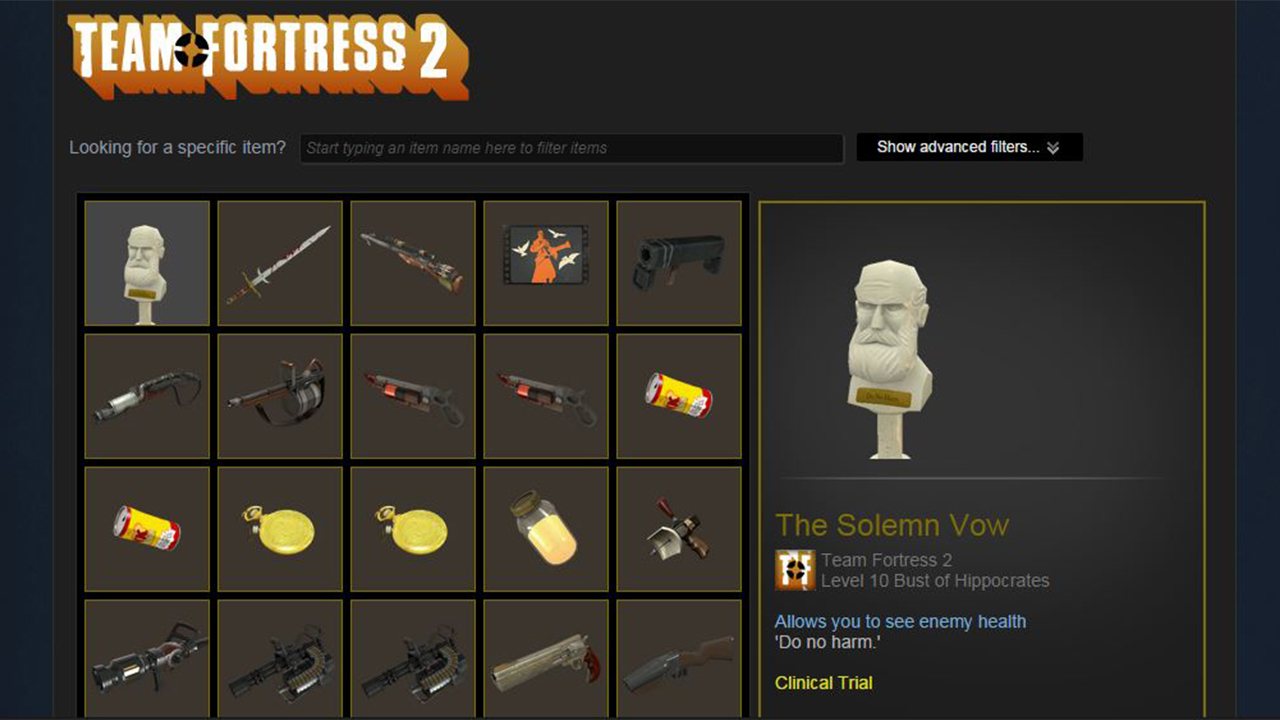 Packaged in the latest Steamworks SDK update (via Gamasutra) a few days ago, the Steam Inventory Service “is a set of new Steamworks APIs and tools that allow a game to enable persistent items that have been purchase [sic] or unlocked by individual users without having to run special servers to keep track of these user’s inventory.”

This is basically Valve’s monetization approach for Team Fortress 2 and Dota 2, which has been profitable for both the company and enterprising individuals. In short, players can trade or sell crafted and randomly dropped in-game items. While trading is a free service the Marketplace allows sellers to conveniently list items for store credit, with Steam acquiring a service fee from each transaction.

These items are mainly cosmetic and come in different rarities. Thus players don’t feel like they’re being squeezed for money, the game doesn’t get mired in pay-to-win nonsense, and Steam makes a sizeable income flow.

Developers are now free to configure item drops based on playtime or after meeting certain criteria, and that these can be marked either as tradable or sellable. Crafting recipes are also available for more unique and valuable items.

Furthermore, with curated Steam Workshops recently opened for non-Valve games, it’s entirely possible to leave a majority of the item creation work to the playerbase instead. Modding is and will continue to be a popular aspect to PC gaming, and Workshops enables popular content creators to get paid. Having high quality community-created work is always a great way of extending a game’s lifespan.

The risk here is that developers still have to consider whether such a service is in keeping with their game’s design. We only need to look at Blizzard Entertainment’s aborted Diablo 3 auction house as an example in bad implementation.

Ade thinks there's nothing quite like a good game and a snug headcrab. He grew up with HIDEO KOJIMA's Metal Gear Solid, lives for RPGs, and is waiting for light guns to make their comeback.
Previous post Deus Ex Universe's Hair Will Be Shown Off At GDC 2015
Next post 4v1 Shooter Evolve is Out Today