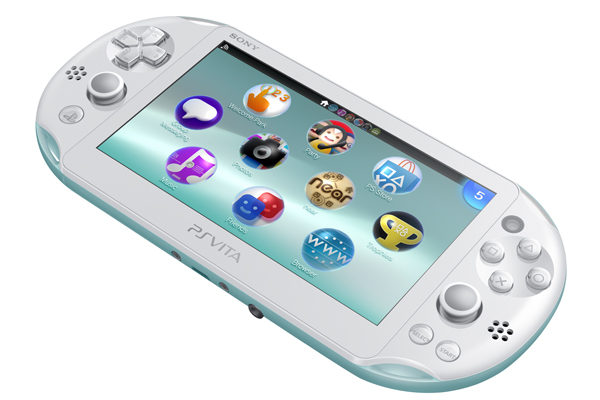 It’s not quite the leap to next-gen (that happens next month for us Asians) but we do get something related out of Sony.

Come 14 November, the slimmer and lighter PlayStation Vita (PCH-2006 series) will be available in Singapore at a recommended retail price of SG$299. It comes with a 1GB internal memory card and a bunch of other technical improvements that we’ve touched on previously.

If you plan on picking one up then consider the two limited edition bundles that’ll be out at release. The Gundam Breaker Starter Pack ($399) includes a “HGUC 1/144 Gundam & Zaku Mass Production Type Set” while the God Eater 2 Fenrir Edition ($369) contains a specially designed cloth and strap.

Accessories coinciding with the launch will be a protective film ($9.90), a wired cradle ($29.90) and soft cases ($17.90 each) that correspond to the Vita’s six new colour schemes – Black, White, Lime Green/White, Light Blue/White, Pink/Black and Khaki/Black.

Prospective buyers should also note that Sony Computer Entertainment Hong Kong is implementing a warranty plan that entitles newly purchased PCH-2006 Vitas to one-year of free repair service. These must be bought in countries where the new Vita will officially launch, which so far include Singapore, Malaysia, Thailand and Indonesia.

Already Have A Vita?

Don’t fret, for the journey’s just getting started no matter what model you own. According to the PlayStation US blog, the version 3.00 system update is coming soon.

The highlight is a feature called PS4 Link for Remote Play and that buzzword, second screen support. Don’t get too excited though, as the video you’ll get to watch below realistically points out that Remote Play is best done over an Ethernet connection (within your home, for example) and close to the Wi-Fi source.

The Vita library of games is going to improve as well, if the announcements this year were anything to go by. Admittedly a bunch of them are simply PC ports, although their picks so far have been well-made ones that range from Dustforce to the likes of Borderlands 2.

Ultimately it’ll be up to a few titles to step up and be system sellers, so that we can look up from our Pokemon/Animal Crossing/Fire Emblem games and take notice.

Ade thinks there's nothing quite like a good game and a snug headcrab. He grew up with HIDEO KOJIMA's Metal Gear Solid, lives for RPGs, and is waiting for light guns to make their comeback.
Previous post Path of Exile Gets Published In Singapore and Malaysia
Next post The New Units in XCOM: Enemy Within – Part II