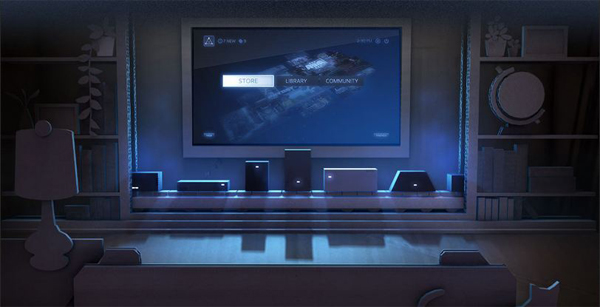 As everyone expected, Valve’s second announcement involved hardware. The Steambox concept now has an official name, Steam Machines, which admittedly sounds far more impressive and would earn a steampunk nod of approval. Unless you’re one of the lucky 300 chosen to test the prototype this year, these machines will be commercially available in 2014.

“Entertainment is not a one-size-fits-all world. We want you to be able to choose the hardware that makes sense for you, so we are working with multiple partners to bring a variety of Steam gaming machines to market during 2014, all of them running SteamOS.”

The idea of different configurations for different purposes is here to stay, allowing Valve to offer Steam Machines at a wide price range for a wider audience. It’s much easier for families to jump on casual gaming with this as an alternative over the Android-based Ouya. It’s even perfect for the PC gamer who wants the option of playing in the living room (such as what the PlayStation 4 and the Vita TV does), or for console gamers who wants in on the PC action without having to bother with technicalities.

Valve confirms that these will be made by different manufacturers and will be completely open to user customisation. You can install another OS, install hardware and software and just do with it as you please. It basically sounds like a line of gaming PCs but with smaller form factors. That also means you don’t have to buy a Steam Machine if you already own a gaming PC and don’t intend to play away from the desk – simply install SteamOS instead.

Specifications, pictures or even the list of hardware manufacturers are all unknown so far. Valve promises to tell us soon although they do have something else planned in the meantime.

“While these products are still in development, we need your help. As always, we believe the best way to ensure that the right products are getting made is to let people try them out and then make changes as we go. We have designed a high-performance prototype that’s optimized for gaming, for the living room, and for Steam. Of course, it’s also completely upgradable and open.”

Again, it’s a limited beta with only 300 slots available so don’t get your hopes too high. 30 of those will be given to those who have a history of community participation and testing, while the remainder will be randomly selected from a pool of eligible participants. The terms of agreement doesn’t specify any country restrictions (which makes sense on one hand considering Steam is a global service) so go give it a shot if you’re so inclined. You’ll need a Steam account and have to complete these tasks before 25 October.

For a complete read of the announcement and a FAQ, just head over to the official page.

That leaves us with the third and final announcement, set to happen on a Saturday morning for us. Valve has kindly teased about it: “[…] we have some more to say very soon on the topic of input.”

I guess a holographic or neural form of input would be too much to ask for. Does a Steam Machine sound like something that’ll sit beside your PlayStation 4 and (eventually) Xbox One? Let us know!

Ade thinks there's nothing quite like a good game and a snug headcrab. He grew up with HIDEO KOJIMA's Metal Gear Solid, lives for RPGs, and is waiting for light guns to make their comeback.
Previous post Hands-On: ASUS Republic of Gamer Desktop
Next post South Park: The Stick of Truth Releases This December