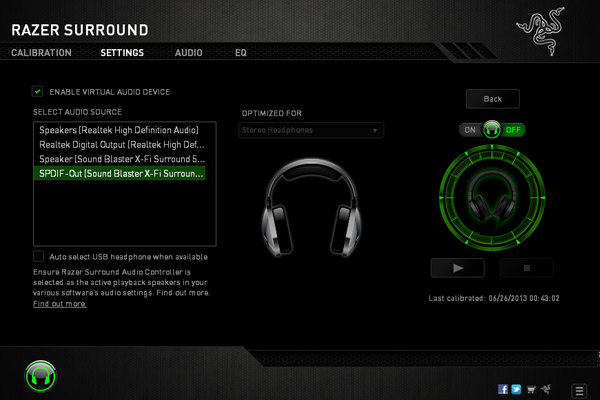 Razer’s surround sound headsets don’t come cheap. Their Chimaera 5.1 and Tiamat 7.1 kits cost nearly SG$300 each, making them the sort of investment you’d normally mull over for quite a bit (well, most of us anyway). Realising this, Razer have released a new piece of software that’ll help bring virtual 7.1 channel goodness to any audio output device you have.

As part of the Razer Synapse software management suite, Razer Surround exists to complement the aural end of video gaming, something the company has taken a growing interest in lately. Aside from providing surround virtualisation, the program also comes with audio enhancements such as bass boost, sound normalisation and communications levels, all with adjustable sliders. Think of it as an all-in-one stop for your audio needs, if you will.

Calibration is a quick process that simply involves pointing out where you feel the sampled audio is coming from, going through all seven positions – front, front sides, sides and rear sides. The end result is pretty good so far although your results may vary.

Razer Surround is a US$19.99 download which has been waived for now. Instead you have the option of donating to Child’s Play, a charity organisation that sets up worldwide toy drives for children’s hospitals. The price tag takes effect January 2014 onwards.

Personally I quite like the surround effects this provides to certain games but I’d rather fall back on the Creative Sound Blaster X-Fi Surround 5.1 Pro for other media. Obviously there are cheaper headsets and better sound cards out there; or the fact that “true surround sound headsets” which come with individual drivers for better positional audio just perform better. When it comes to gaming on a budget, however, Razer Surround easily takes the cake.

Ade thinks there's nothing quite like a good game and a snug headcrab. He grew up with HIDEO KOJIMA's Metal Gear Solid, lives for RPGs, and is waiting for light guns to make their comeback.
Previous post Chaos Online’s Cash Shop Opens with Double Boost Event
Next post Time for the Vengeance Cup Singapore Finals