Razer Core may just be the ultimate home companion for notebooks 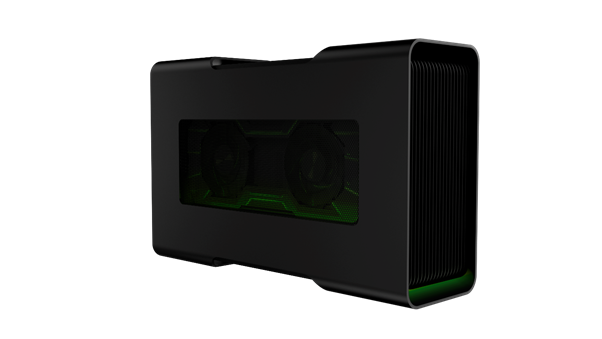 The tug-of-war between power and portability for gaming notebooks will soon be less of a dilemma, at least within Razer’s line of products.

The company has announced that the Razer Core, a Thunderbolt 3 external graphics enclosure, is now available for pre-order. The device is priced at US$499 (S$681) as a standalone purchase or US$399 (S$545) when bought together with a compatible Razer notebook, and will start shipping in April.

The Core isn’t something you’d want to lug around. Weighing 4.94 kg with enough space for a double-wide, full-length PCIe graphics card, it seems destined to live on a desk at home. However, its plug-and-play configuration is so seamless it might as well be a hub for your notebook.

Sporting four USB 3.0 ports and one for Ethernet, a user can simply leave all of their peripherals plugged into the Core. And since the Thunderbolt 3 (USB-C) connection provides both bandwidth and power, it essentially boils the whole setup down to one cable.

Imagine a typical scenario today: You get home and plonk the notebook on the desk. You then have to fish around for the power adaptor, plug that in, and then reconnect whatever desktop peripherals you have – let’s say the standard trio of a mouse, keyboard, and headset.

With the Core, all you do is plug in that single Thunderbolt 3 cable and you’re good to go. There’s no need to reboot the notebook either if a supported graphics card from Nvidia or AMD is installed. In fact, the Core is the first product to feature AMD XConnect technology, allowing seamless switching between discrete and integrated graphics.

So at the end of the day, a user benefits from the weight- and space-savings of an ultra-thin notebook for portability, without sacrificing gaming or video editing power at home. Exciting stuff, provided you have a Razer notebook.

If not, the new Razer Blade was announced yesterday, sporting improved hardware specifications at a lower price than its predecessor. Alternatively, there’s the flagship Razer Blade Stealth, which is also suitable for professional design applications thanks to its 100% Adobe RPG display. Both notebooks are less than an inch think and come with the all-important Thunderbolt 3 port.

Technical specifications, including a list of compatible graphics cards, can be found here – you’ll have to scroll down a bit for the Razer Core.

Ade thinks there's nothing quite like a good game and a snug headcrab. He grew up with HIDEO KOJIMA's Metal Gear Solid, lives for RPGs, and is waiting for light guns to make their comeback.
Previous post Gears of War 4 lays out early access and open beta details
Next post The GDC Awards’ animated tribute to the late Satoru Iwata