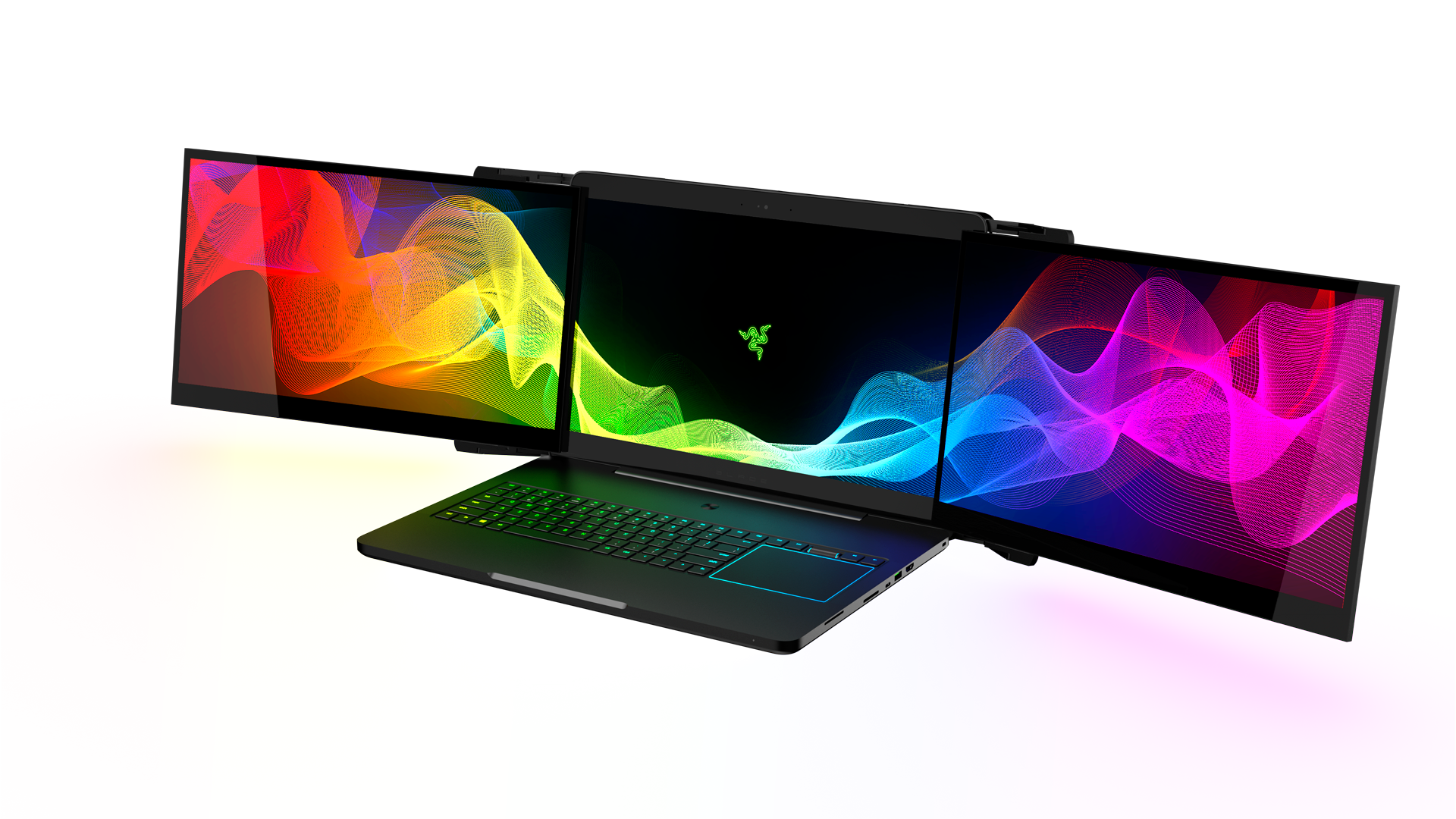 For Razer, the Consumer Electronics Show is its playground. The “gamer lifestyle” company makes a point of grabbing tech and gaming headlines with products and ideas that just resonate with the little kid in all of us. So what could they possibly show so soon after releasing the revised Razer Blade Pro? Plenty, as it turns out.

How does that proverb go: three monitors are better than one?

Razer’s biggest splash this year is a laptop concept called Project Valerie. It’s hard not to notice the three built-in monitors, each of them is a 17.3-inch 4K IGZO display stuffed with NVIDIA G-SYNC technology and 100 percent Adobe RGB color accuracy. Boasting a combined resolution of 11520 × 2160, you can bet it takes advantage of NVIDIA Surround View gaming too.

There’s nothing fussy about it, either. The monitors are automatically deployed by way of hinges, locking into place for a perfect alignment. Powering those screens is a GeForce GTX 1080, making Project Valerie suitable for virtual reality as well.

Everything else about it utilizes innovations seen in the equally stunning Razer Blade Pro. There are the proprietary and well-received Ultra-Low Profile Mechanical switches, a custom heat management system, an aluminum unibody chassis, and Razer Chroma lighting crammed in wherever possible.

But the single most remarkable aspect is how Razer manages to keep Project Valerie at just 1.5-inches thick and weighing less than 12 pounds. That’s by no means a daily-carry but it’s comparable to the average 17-inch gaming laptop, making one marvel at how slim the internals are.

As impressive and drool-worthy as all this is, Project Valerie is still just a concept. It may eventually become reality as with Project Fiona, now known as the Razer Edge. Or it may simply remain a gamer’s rose-tinged dream, such as the modular, oil-cooled PC that was Project Christine.

The next step in immersion

Trust Razer not to have just one project.

After investing all that research and development into Razer Chroma, the company has opened the floodgates. The RGB lighting platform is now available to third-party vendors such as Lenovo, NZXT, Antec, and more, allowing them to build upon a system already integrated into games such as Overwatch.

As for Razer, they’re turning their attention towards room-scale immersion, their first step a partnership with Philips Lighting. To showcase where that may lead, they’ve come up with Project Ariana, a high-definition video projector that processes in-game elements to throw out in the real world. It adapts to the dimensions and features of the room by using a pair of 3D depth sensing cameras and proprietary calibration software.

Best to see it for yourself.

Ade thinks there's nothing quite like a good game and a snug headcrab. He grew up with HIDEO KOJIMA's Metal Gear Solid, lives for RPGs, and is waiting for light guns to make their comeback.
Previous post E-BLUE unveils SCION-32, a hybrid monitor and tower
Next post Games This Month: January 2017