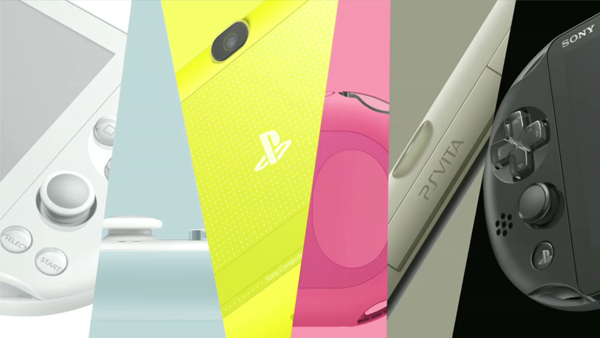 Slimmer, Lighter, Rounder
It’s unfortunate how the human physique doesn’t follow product design. The new Vita has gotten rounder for a more comfortable fit, but Sony’s handheld has simultaneously gotten 20-percent slimmer and 15-percent lighter too. Adding to the list of ergonomic revisions are three buttons – PS, START and SELECT – that will now be round and convex in shape, making those button presses easier.

Better
Now that you can hold the Vita for longer, you’ll get to play it for longer too. The redesigned internal architecture helped to improve battery duration, squeezing out an additional hour’s worth of gameplay or two extra hours of video playback. In this day and age, any device with a lengthy battery life is highly appreciated.

Recharging it will be much more convenient too, thanks to the Micro-USB port (Type B). It’s the same one being used on smartphones, so you can also use the port for data transfers, connecting to speakers or plugging in a headset. Helping you keep track of the battery’s status and other bits of information is the new notification bar at the system’s top, handy for when you receive messages.

Oh, we’re not done yet. The new Vita (should we start calling it the Vita 2000?) will also incorporate a 1GB internal memory card, so you can run some of your games even without a separate memory card.

Brighter
In more ways than one! The obvious part being that the new PlayStation Vita will be available in six different colours: Black, White, Lime Green/White, Light Blue/White, Pink/Black and Khaki/Black.

Less obvious (until we see them for ourselves, anyway) is the new high-definition 5-inch LCD.  That’s 16 million colours crammed into that 960 x 544 display.

Cheaper?
With a recommended retail price of ¥19,929 with tax (approximately SG$253), that makes the new 2000 series cheaper than the current one in Singapore, which now retails for SG$299 following a price drop last month.

It’s unlikely though, as prices will definitely be revised for different regions.

At the moment, the PlayStation Vita PCH-2000 will debut in Japan on 10 October.

Ade thinks there's nothing quite like a good game and a snug headcrab. He grew up with HIDEO KOJIMA's Metal Gear Solid, lives for RPGs, and is waiting for light guns to make their comeback.
Previous post PVP Super Friends Claims Grand Prize in TanksAsia Masters Season 1
Next post Sony Broadens Their Reach with the PlayStation Vita TV