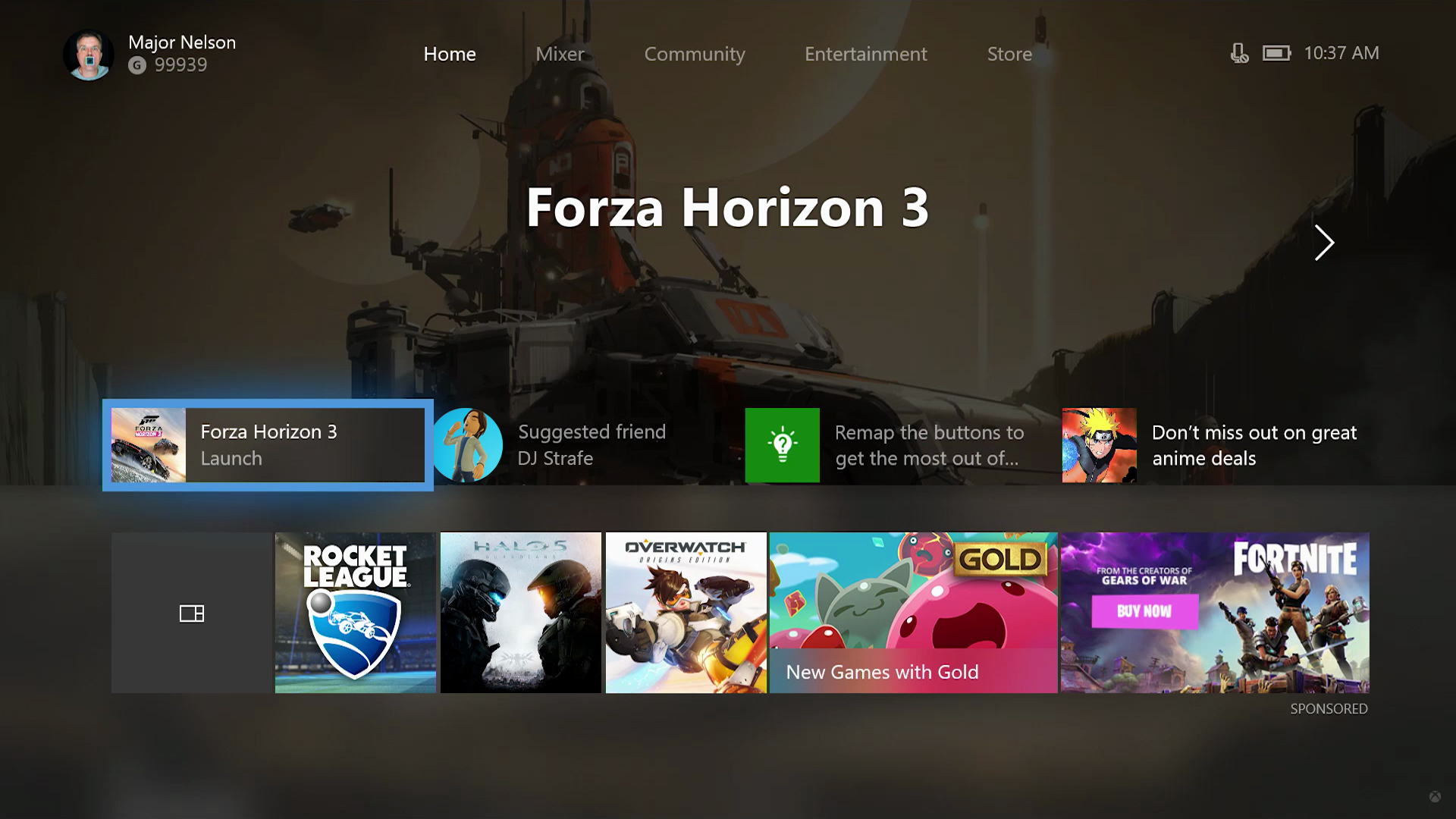 All is not quiet at Team Xbox. For the past several months, Microsoft has been pushing out a series of usability and feature updates for Xbox One and Windows 10 PCs, in what appears to be a major service refresh in preparation for the Xbox One X. Latest to arrive is a Home menu overhaul that’s designed to provide speed and user customization, with smart content blocks that evolve according to one’s interests and habits.

In an official announcement, we’re told that the new dashboard is “part of a design system called Microsoft Fluent Design.” In short, Xbox One owners get to dictate what appears on their Home screen at all times, effectively letting them get to the content they want faster. It’s as simple as selecting a game or friend and sending them to the Home screen via the Menu button.

Shortcuts are a great feature as-is but they’re adding some context-sensitive bonuses so users stay up-to-date. For example, a content block for a game may include an activity feed from the developer or show when your friends are playing the game online. Should you ever lose interest, you’ll be able to reposition that particular block or remove it altogether.

More content block types will be available in the coming months, though what exactly these are or how they differ are not mentioned.

Additional improvements come in the form of new layouts for Guide and the community sections, which similarly aim to improve speeds while highlighting relevant content. Given the increasingly online nature of games, the team moved to make viewing activity feeds and comments easier, adding a full-screen mode so users can switch between browsing and detailed views. Game Hubs, Profiles, and Clubs have also been made to be “more dynamic and engaging” while Clubs get a few tweaks of their own.

Lastly, more titles will be added to the Arena to tap on the tournament infrastructure provided by Xbox Live, yet what these are and when exactly it’ll happen remain unknown for now.

Over on the Windows 10 side of things, they’re finally adding a Game Mode toggle in the ‘Game bar’ overlay, allowing users to turn it off on an per-game basis. It’s a sensible addition, following reports of how varied the performance boost tends to be – in some cases they’re negligible or even detrimental.

On top of that, new audio broadcast options are coming to Mixer alongside an Xbox Live Network Troubleshooting option under the Windows 10 Settings menu.

It’s a hefty update, for sure. Here’s a video overview:

In all, this is a welcome upgrade to the Xbox One’s user experience, cutting the visual clutter for the streamlined, personalized approach seen in Microsoft’s other products. With three months to go before the Xbox One X launches, we’re keen to see what else the Redmond campus has in mind for gamers.

Ade thinks there's nothing quite like a good game and a snug headcrab. He grew up with HIDEO KOJIMA's Metal Gear Solid, lives for RPGs, and is waiting for light guns to make their comeback.
Previous post PSX SEA – Hands-on with Taiko no Tatsujin: Drum Session!
Next post World of Warships to get Unique Commanders and Pan-Asia Destroyers