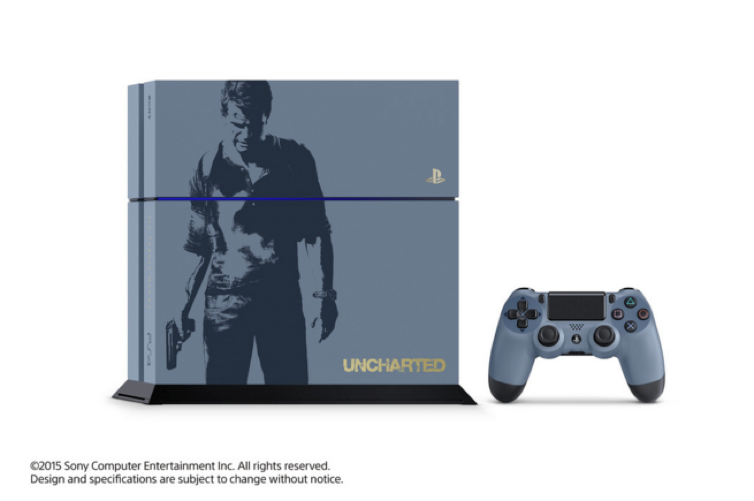 Everyone saw it coming. With Uncharted 4: A Thief’s End being the most visible PlayStation 4 exclusive this year, it was only a matter of time before Sony announced a limited edition console bundle. Well here it is, in all its silk-screened glory, along with a couple of similarly themed accessories.

Colored in what Sony describes as Grey Blue, this limited edition 500GB console lets fans enshrine Nathan Drake in their rooms. They went with a spitting image of him too, the charismatic protagonist looking more like a fatigued bloke than an action superstar — highly appropriate given the game’s premise.

The PlayStation 4 bundle includes a 12-month subscription to PlayStation Plus and will retail at the recommended price of S$599.

Accompanying the console release are a Grey Blue DualShock 4 (S$67.90), as well as a Grey Blue Gold Wireless Headset (S$140). The latter features “Sic Parvis Magna” lettered in gold, a reference to Sir Francis Drake’s ring from the first game, which roughly translates as “greatness from small beginnings.” The headset even has a custom audio mode via the companion app.

A Thief’s End marks the fourth and final entry in Naughty Dog’s Uncharted series. Nathan is forced out of retirement to help his presumably-dead older brother, Sam, and together they seek out Libertalia, an unverified pirate colony founded in 17th century Madagascar. In short, the Drake brothers are out for pirate booty.

However, this also appears to be a departure from the series’ typically light-hearted nature. The developers forbiddingly call it Nathan’s greatest adventure, one that will “test his physical limits, his resolve, and ultimately what he’s willing to sacrifice to save the ones he loves.”

They even changed the title theme!

Uncharted 4: A Thief’s End brings its movielike action to our TVs on 26 April, 2016. Fun fact: We’re getting a long weekend just after release thanks to Labor Day.

Ade thinks there's nothing quite like a good game and a snug headcrab. He grew up with HIDEO KOJIMA's Metal Gear Solid, lives for RPGs, and is waiting for light guns to make their comeback.
Previous post Hearthstone tournament and Fireside Gathering on 27 Feb
Next post WGL APAC-Asia Season 2 – The Teams