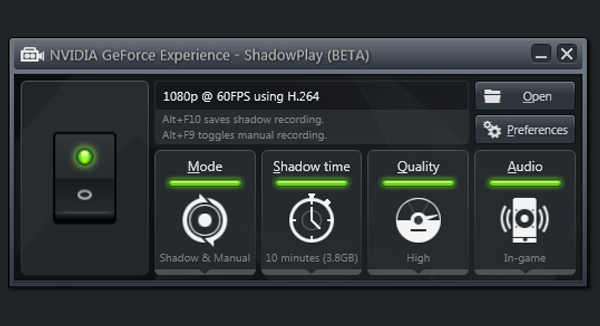 Forgetting to update our video drivers happens to the best of us, which is why Nvidia developed GeForce Experience. The other big feature it boasts is automatic game optimisation, but come 28 October the free software will be updated with ShadowPlay, a gameplay capture tool. Brace yourself, YouTube.

ShadowPlay utilises H.264, a popular codec regarded for its compression efficiency. Enabling Shadow Mode will let the tool keep the last ten to twenty minutes of your game in a temporary buffer on your hard drive, which you can then save once you hit Alt-F10. Alternatively, hitting Alt-F9 will begin manual recording. The resulting clip can later be edited in an mp4-compatible editor before uploading your moment of glory/humour on YouTube and its peers.

If you prefer streaming then Nvidia also has you covered with Twitch functionality, albeit at a later date.

The one caveat is that ShadowPlay encodes on a hardware level. While this means that recording will not have as huge an impact as software solutions on game performance, it also means that you’ll need a GTX 650 graphics card or higher.

No AMD alternative exists at the moment although there is MSI Afterburner’s Predator, provided you own a GPU from the manufacturer.

Will this be relevant for you? If so, do share your gaming channels if you have one!

Ade thinks there's nothing quite like a good game and a snug headcrab. He grew up with HIDEO KOJIMA's Metal Gear Solid, lives for RPGs, and is waiting for light guns to make their comeback.
Previous post Studio behind The Bureau: XCOM Declassified and BioShock 2 Struck By Layoffs
Next post Developer “Censors” YouTube Criticism of Their Game