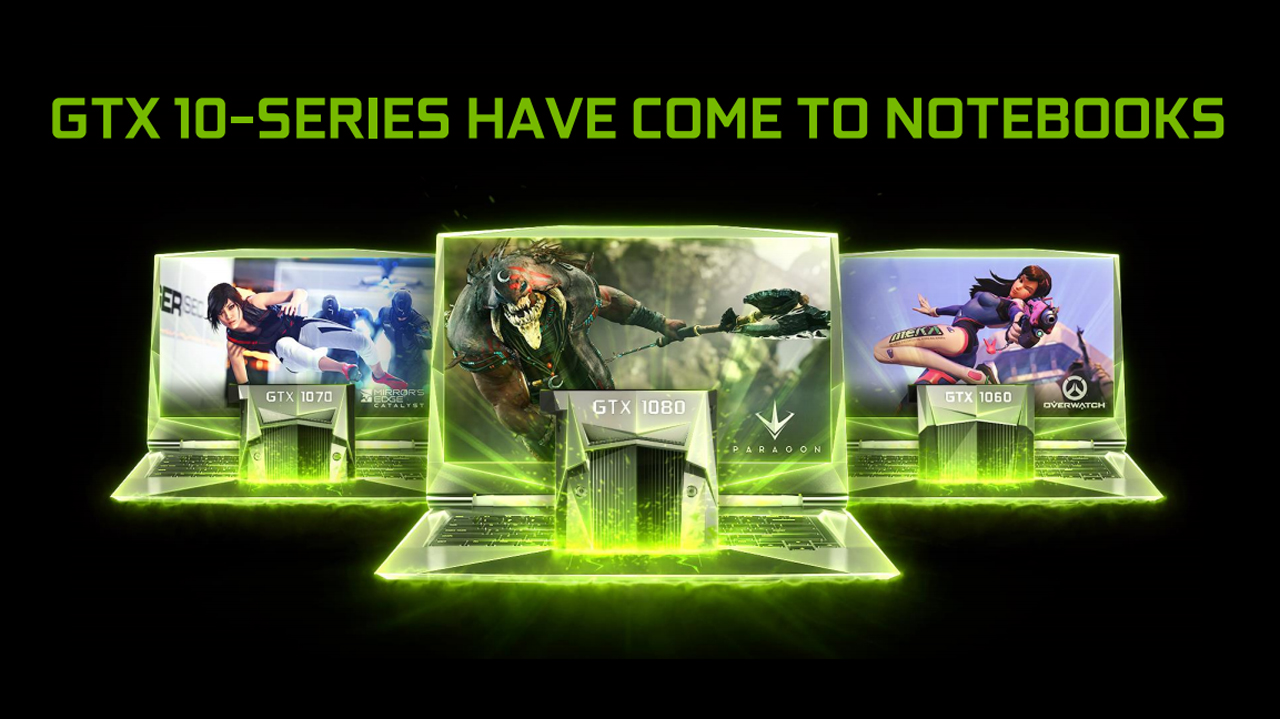 The conversations surrounding PC gaming tends to be about resolutions and frame rates, at least on a surface technical level. It’s a target by which enthusiasts build their rigs and it’s easy to see why – quite literally! Now, thanks to NVIDIA’s new Pascal-based graphics cards, notebook users can join in on the discussion too.

At a launch event in Singapore, NVIDIA introduced the GTX 1080, 1070 and 1060 GPUs for notebook computers, dropping the “M” suffix typically used for their mobile variants. Performance-wise these cards fall within a 10% margin of their desktop equivalents, ensuring that portability doesn’t mean compromises.

NVIDIA’s Pascal architecture itself is already a huge leap in performance over last generation’s Maxwell cards – 75% greater to be exact – and it offers more than three times the overclocking potential for demanding users. And with VR on the table, NVIDIA’s VRWorks grants graphical performance improvements of up to three times, making for smoother or more detailed gameplay. For us consumers, what all that translates into is choice, and manufacturers have been jumping on the opportunity. Whether it’s a 4K panel, 120Hz refresh rates, or VR capabilities, there’s going to be something for everyone.

Acer’s Predator 15 and 17 notebooks tackles heat management head-on with the Predator FrostCore, a CoolerMaster fan unit that’s hot-swapped in and out like any other drive bay. Paired with their DustDefender, which alternates airflow to reduce internal dust build-up, and you’ve got a system that keeps core components cool.

Aftershock are busy focusing on NVIDIA’s G-Sync technology. In short, it synchronizes display refresh rates to the GPU for a smoother and sharper visual experience, with Aftershock deeming it one of the biggest gaming upgrades one can make. Buyers are free to mix and match parts according to their budget (including SLI) or even get a custom paint job.

ASUS’ presentation reminded us about the ROG GX700, the world’s first liquid-cooled laptop. That magic happens via a detachable module at the rear, sacrificing desk space in favor of unparalleled overclocking capability. It sounds perfect for the GTX 10-series so ASUS did it again, with the ROG GX800 packing a GTX 1080 SLI and a 4K UHD display.

HP didn’t have a presentation though they did name drop the HP OMEN, a line of 15- and 17” gaming laptops sporting the GTX 1070. Certain models feature NVIDIA G-Sync and can be upgraded to a 4K IPS display as well.

MSI addressed a recurring problem for notebooks: overheating. Cue MSI’s Cooler Boost Titan system, upgraded from 9 to 15 heat pipes – in the GT83 VR Titan SLI’s case, 12 pipes for the dual GPUs and 3 for the CPU kept temperatures under 80 degrees Celsius during stress tests. No overheating means no performance throttling, keeping games running at their best.

Considering the performance boosts and future-proofing that the NVIDIA GTX 10-series provides, buying a gaming notebook should no longer feel like a poorer value proposition. It’ll still be pricier than a desktop but if portability is your concern then you’ll be glad to know you’ll be gaming on fairly equal footing.

With Comex 2016 now underway, getting hands-on time with these notebooks couldn’t get any easier. Not only are the booths all under one roof but you’ll also find promotions that’ll either save a couple of hundred dollars or accessories that go well with your shiny new purchase. Get your floor plans here!

Ade thinks there's nothing quite like a good game and a snug headcrab. He grew up with HIDEO KOJIMA's Metal Gear Solid, lives for RPGs, and is waiting for light guns to make their comeback.
Previous post Sony reveals new PlayStation accessories
Next post Close-up look at the new PlayStation 4 ‘Slim’