Home / Latest / On The Interwebs / Custom gamerpics, Looking For Group, and more great features lined up for Xbox One

Custom gamerpics, Looking For Group, and more great features lined up for Xbox One 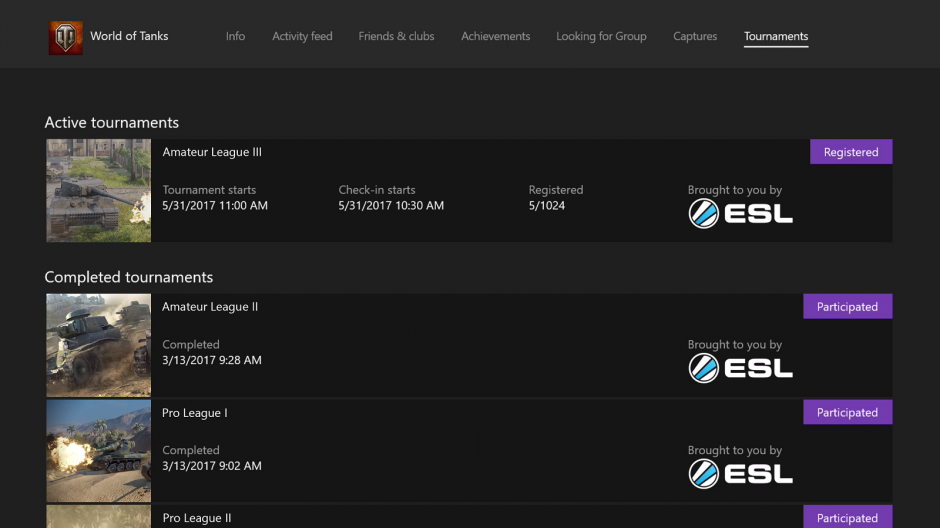 The system updates continue to roll out for Microsoft’s Xbox One console, at least for Xbox Insiders. The new features are universally exciting this time around, based on fan requests from Xbox Feedback.

We’ve compiled some of the highlights below:

Discover tournaments from your Xbox One or Xbox app on Windows 10, get notifications when your match is ready, jump directly into your match on the Xbox One, enjoy automatic results reporting, and show off the results on your activity feed. (ESL-created tournaments for World of Tanks will be live.)

From your console, Windows 10 PC, or mobile phone, update your gamerpic with a custom image.

One of the many ways to access the game stream of someone broadcasting their gameplay.

We’re adding the ability to hide individual posts, pin posts to the top of your feed, and filter posts by friends, games or Clubs.

When you create an LFG post, as the owner you will be able to see new vetting cards that include hero stats from gamers interested in joining your party. Hero stats are contextual to the game you’re playing, showing you relevant stats like kill/death ratio, rank, or score.

You can see previous LFG posts that you have created, participated or shown interest in, and can copy them to create new posts.

Club owners can upload custom images for their Club logo and Club background.

Club owners and admins will be identified and labeled in their text posts to better help them stand out and manage their community.

Club owners and admins can pin a post at the top of their Club feed.

Filter ‘My Games and Apps’ by platform

We’re adding the ability to filter your game library by platform – Xbox One and Xbox 360.

Allows for Wi-Fi authentication through a browser. Great for colleges, hotels, or public Wi-Fi locations.

On the Xbox app for Windows 10, we’re adding the option to select the audio input and output sources for Party chat.

As before, the updates will release over the next few weeks for select Xbox Insiders.

The full list of features can be found over at Xbox Wire.

Ade thinks there's nothing quite like a good game and a snug headcrab. He grew up with HIDEO KOJIMA's Metal Gear Solid, lives for RPGs, and is waiting for light guns to make their comeback.
Previous post Uncharted: The Lost Legacy will have silenced pistols and larger levels
Next post Hey! Listen! Materia Collective’s ‘Hero of Time’ now taking pre-orders