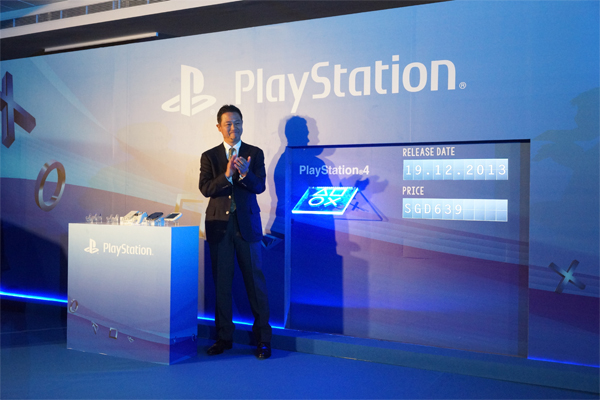 Deputy President Hiroyuki Oda of Sony Computer Entertainment Japan Asia announced that the long-awaited PlayStation 4 will release on 19 December 2013 for a recommended retail price of $639. Pre-orders commence tomorrow at all Sony and Focus stores, a list of which you may find further below.

Now that we’ve gotten our hands on the press releases, here’s all the additional information you’ll need prior to making a decision.

Note: All prices listed in SGD.

SCE Hong Kong has a total of three console bundles lined up for launch day, each loosely targeted at different audiences.

Every pre-order will come with a free month’s worth of PS Plus membership. Bundles that include a game will grant an additional month of PS Plus as well as a $10 PSN Money Voucher.

These are all are subject to availability so if you’re dead set on being an early adopter, securing a pre-order as soon as possible ought to be on the agenda.

All PS4’s purchased in an official launch country – Singapore, Malaysia, Thailand and Indonesia – will be eligible for one year of free repair service in those territories in addition to Philippines and Vietnam.

On launch day, 100 lucky customers will get a chance to receive the PlayStation Vita TV, a 10-year PS Plus membership and limited premiums from AAPE By A Bathing Ape. Announcements will be made on the PlayStation Asia Facebook page and the official site.

Subsequently, from 19 December to 1 January 2014, a pop up store will be set up outside Wisma Atria to give customers some hands-on time with the PS4. There’s an appreciable difference between watching a 1080p trailer on YouTube and seeing a 1080p game live in action. Killzone: Shadow Fall will undoubtedly be on display, so soak in the amazing draw distance and other visual treats packed into it.

Aesthetically, the PS4 is a sleek piece of hardware that would look good on most shelves. The absence of an external power brick really helps reduce the clutter around the device, leaving only the clump of wires behind the unit (and the PlayStation Eye) as the real challenge for concealment. I wondered on more than one occasion how the inevitable “Slim” version would end up looking like because the PS4 is fairly small as it is.

The demo booths were strictly limited to the games they were running, so we didn’t get an opportunity to mess around with the user interface. The Share button did work as intended, choosing between screenshot or video after a small delay, but again we never got to go far with it.

At the end of the day, it’s what you do with the PS4 that counts. For the vast majority of us, that’ll be playing next-gen games. Sony put up an impressive effort for their launch-frame titles but there’s nothing on that list that screams “buy me now!” You’d get the visual splendours of Resogun and Killzone: Shadow Fall to be sure (there was no Battlefield 4 running) but what happens once you’re done with those games? How long will it take before the next title on your wish-list comes round?

Unless all it’s for is to scratch that buy-shiny-new-gadget itch you’re getting, then by all means go wild. It’d make for some mean bragging rights in those first few months, and The Playroom can easily be part of the showcase.

Reactions to the price have been mixed at best, since we’re paying more than our North American counterparts. Keep in mind, however, that we’re also releasing earlier than Japan.  A $599 price tag would have definitely been more attractive but with no competition at the moment, Sony pretty much have free reign.

Don’t forget about that pop up store outside Wisma Atria after the PS4’s launch! That’ll probably be the best time to judge whether you’d need one before 2013 comes to an end.

Ade thinks there's nothing quite like a good game and a snug headcrab. He grew up with HIDEO KOJIMA's Metal Gear Solid, lives for RPGs, and is waiting for light guns to make their comeback.
Previous post FTL: Advanced Edition Warps to PC and iPad in Early 2014
Next post Pokémon X & Y Soundtrack Now on iTunes