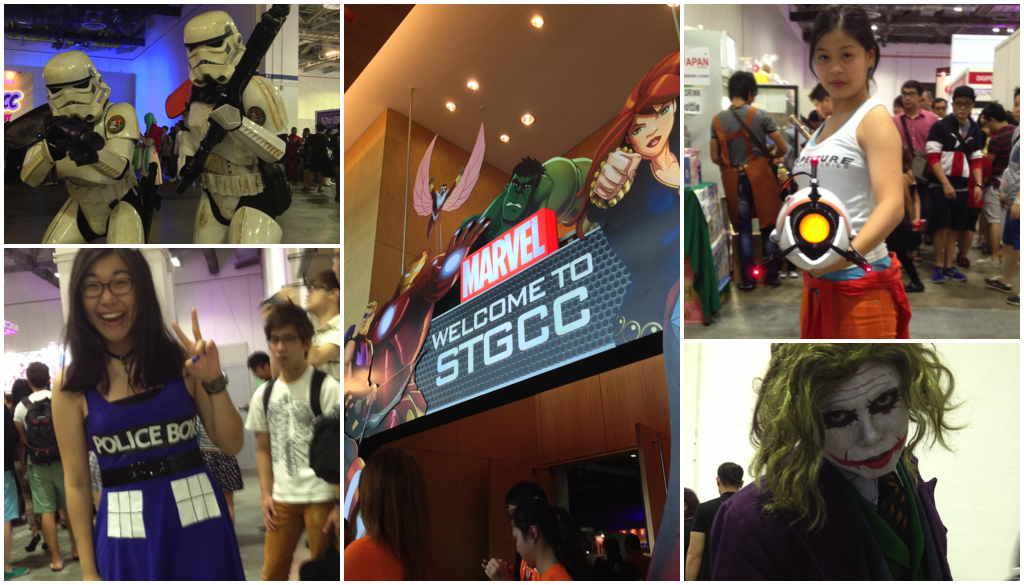 We took a trip down to one of the biggest pop culture events of the year and got MARVELLED with STGCC at the Marina Bay Sands.

It was pretty much an expo for Stark Industries than anything else with Marvel and Iron Man dominating the show floor, including the Hall of Armor Iron Suit Showcase at the Iron Man 3 display. Crowds were split between hanging out at the stage area for panels with C.B. Cebluski and Cort Lane and at the Marvel booth for tons of free t-shirts, posters and memorabilia.

Hot Toys came stocked with their range of realistically-sculpted figures of the Avengers team alongside more Iron Man figures with a gold Midas Iron Man of their own, the STGCC-exclusive scale figures of which were sold out by day two. More Marvel goodness seeped into the other booths like Simply Toys with a whole stretch of Funko POP! vinyl figures for sale covering Marvel, Disney and My Little Pony characters from several major franchises and G&B Comics offering framed comic books from Marvel and DC.

Japanese culture fans were not left out with ODEX making their mark covering several booths with anime merchandise along with Bandai Namco Games showing off Tales of Xillia for the PS3. Several other booths hawked figures and miscellany from popular anime and manga.

And of course, not to mention all the attending cosplayers decked out in their elaborate costumes and exhibiting artists down at the artists’ alley!

Check out our galleries from the Singapore Toy, Game and Comic Convention show floor on our Facebook page! See you next year!
Day One | Day Two

Previous post Mega Man? What Mega Man? All I See Is Mighty No.9
Next post No External Storage for Xbox One’s Launch