Square Enix will hold a conference for E3 2018 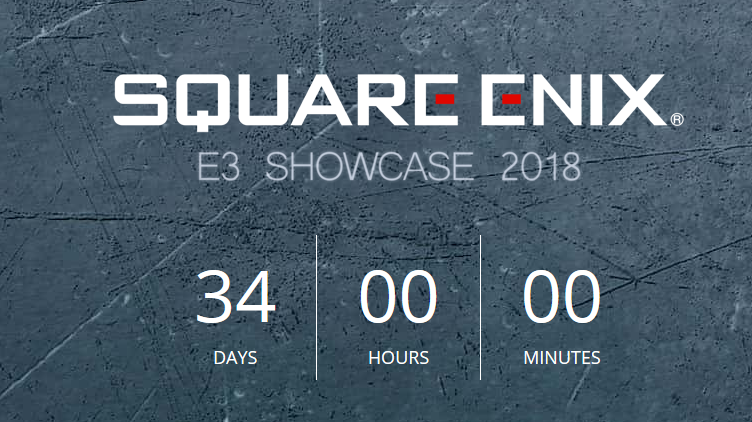 With all the buzz and hubbub of Final Fantasy XV behind us, what could Square Enix‘s next big release be? The answer may lie in their E3 press conference on 12 June, a first for the publisher since 2015.

Taking a leaf from Nintendo, Square Enix are opting for a pre-recorded livestream rather than a live theater broadcast. Cost-savings aside, it also lets them control their messaging better, particularly translations. Their E3 2018 Showcase will be in both English and Japanese, and may be viewed on Mixer, Twitch, and YouTube alongside Facebook and Twitter.

The stream is scheduled to go live at 1am on 12 June, a Tuesday (Singapore time). An archive will be made available on their YouTube channel later that day.

There’s an official page but it only has a countdown and a FAQ for the things you already know.

Unsurprisingly, Square Enix aren’t dropping any hints on what to expect. Fans are no doubt baying to hear more about Final Fantasy 7 Remake, but featured titles are likely to be Shadow of the Tomb Raider, Dragon Quest XI: Echoes of an Elusive Age, and the steadily ramping Kingdom Hearts III.

Who knows, we may even see what Square Enix has in the pipeline for Avengers and other Marvel projects, or a title art reveal for the next main Final Fantasy.

Save the Date!
The Square Enix E3 Showcase 2018 – Monday June 11 at 10 AM PDT/1PM EDT/6pm BST
Join us for a special video presentation to discover the exciting future of Square Enix!#SquareEnixE3https://t.co/OXdt8fTQSo pic.twitter.com/Oj9peIpcm5

Ade thinks there's nothing quite like a good game and a snug headcrab. He grew up with HIDEO KOJIMA's Metal Gear Solid, lives for RPGs, and is waiting for light guns to make their comeback.
Previous post Grab discounted TVs and more at IT Expo 2018, 11-13 May at Singapore Expo
Next post Quick Peek: ASUS ROG Strix GD30 gaming desktop