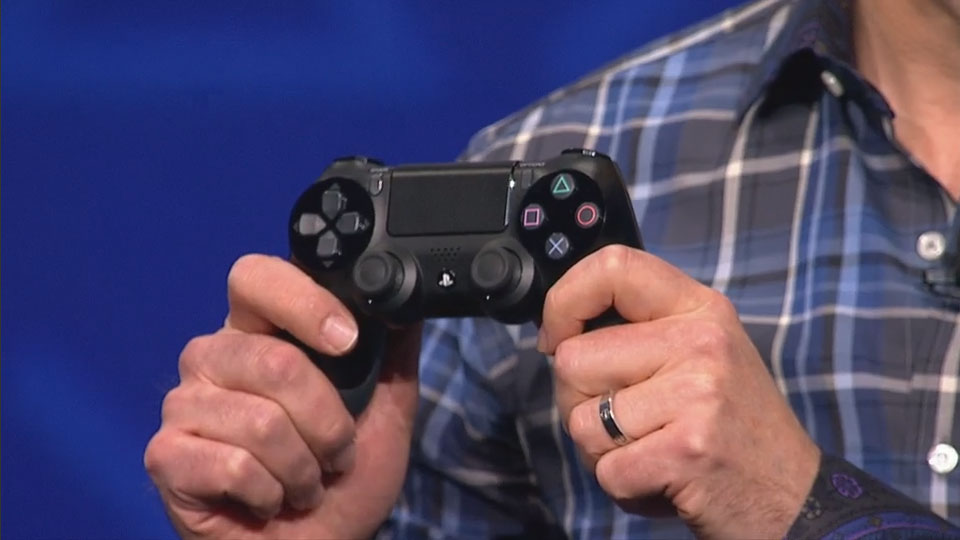 At a global press conference this morning, Sony Computer Entertainment showcased the future of PlayStation with the PlayStation 4.

Inside the PS4
Although not seen throughout the entire presentation, system architect Mark Cerny has said that the PlayStation 4 will feature a x86 CPU, an enhanced GPU, 8GB of RAM and, of course, a local hard drive. The PlayStation 4 is capable of some slick particle-effects, as seen from a real-time tech demo on the Unreal 4 engine by Epic Games.

Then revealed was the DualShock 4. The new controller will feature a touchpad on the front, motion controls, a dedicated “Share” button, used to immediately broadcast your gameplay however you like to your friends and a light bar, which acts similarly to the PS Move controller in terms of controller identification.

Simple, Immediate, Social, Integrated, Personalised
The five key design principles of the PlayStation 4. Showcased around these five principles were the Suspend/Resume functions of the PS4, wherein players can power down their console only to get back immediately to where they were while still in-game; the Share feature, with Facebook and uStream integration to enhance the social experience when playing games, including the sharing of live gameplay video and social gameplay; and the ability to get into a game even while it is still being downloaded.

Games
The first title revealed for the PlayStation 4 was Knack, a game that stars a little robot who bears the titular name. Knack showcases the particle effects that the PS4 can handle, as the little robot can gather a mound of other shapes to become a big, bad robot. The title is revealed to be playable via Remote Play through the PS Vita in a similar fashion to what Nintendo is doing with the Wii U and the Wii U Gamepad.

Other first-party titles announced were Killzone: Shadow Fall, inFAMOUS: Second Son and Driveclub, which will be the game most focused on social features as you manage your real-world team of racing friends to be the best in the virtual racing world.

Third-party titles include Destiny by Bungie (coming to PS3 and PS4 with PlayStation exclusive content), puzzle game The Witness by the people behind Braid, Blizzard’s Diablo III and Ubisoft’s Watch_Dogs, which admittedly, stole the show with a very cool gameplay demo.

While not showcasing actual games, Quantic Dream took the stage by showing off the graphical/polygonal capabilities of the PlayStation 4 down to some serious life-likeness. mediaMolecule took the stage with a PS Move “Sculpting” tech demo.

Sony Computer Entertainment has also announced a future PlayStation app that will allow iOS and Android tablet/smartphone users to utilise their devices as a secondary screen.

The Bad News
The PlayStation 4 will not be backwards compatible, marking the end of PS3 games on future hardware, however, Sony has Cloud Gaming up their sleeves to stream PS1, PS2 and PS3 games. Whether it means that folks who currently own legitimate PS3 games will have to buy them again is unknown at this point.

The Good News
The PlayStation 4 will be out this Holiday season, currently having no price tag, HDD space or what the final hardware will look like. That, I guess we’ll have to wait and see.

Previous post The Future Of PlayStation: Liveblog Recap
Next post PS Store Asia Getting Its New Look On Feb 28th