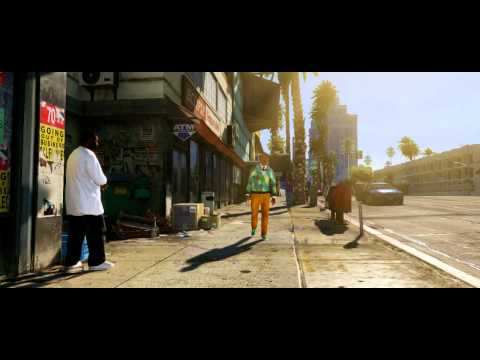 A week after the announcement, Rockstar Games has released the trailer for their upcoming Grand Theft Auto V as promised. The trailer was released at midnight, local time (noon in New York). The minute and a half long trailer confirms suspicions of a Los Santos/San Andreas setting (around R* alternate world of L.A.).

Trailer, with our analysis and speculation after the break.

The new trailer brings Los Santos/San Andreas (or both, if not more) to the next generation console era, with graphics looking better than its predecessor, GTAIV, and probably at the edge with L.A. Noire. Planes are spotted at three instances in the trailer, as well as a blimp, although these may be visual props like the commercial airliners you see flying around Liberty City. A “Wetski” makes an appearance. Licence plates on all the shiny vehicles look unique, at least to each different make of car. A club patron is seen thrown out of a club, perhaps Club Management is carried over to GTAV?

That’s about all you can grab out of a 1:25 minute video without getting too crazy. Still, it’s stunningly beautiful. What do you think about the GTAV trailer?