NVIDIA Highlights lets you share your killing spree as a GIF 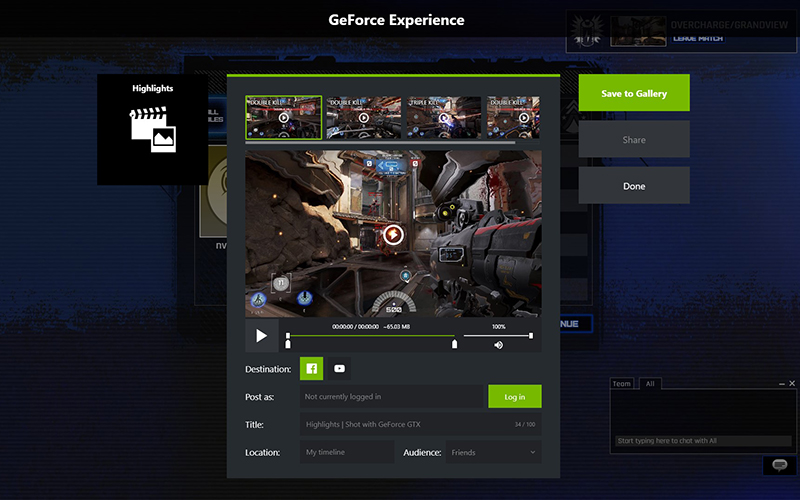 NVIDIA today announced that it is publicly releasing its Highlights SDK at GDC 2018. It comprises a set of tools that enables developers to easily add support for Highlights to their games, paving the way for a larger roster of games that support the feature.

NVIDIA Highlights, or ShadowPlay Highlights, automatically captures your highlight reels in a video or screenshot, and its direct integration with games enables it to identify these moments on its own and save them.

This could be a boss fight of killing spree, but Highlights will present a reel of your best moments once your session is over.

One particularly fun feature is the ability to clip your favorite moment of a video (anywhere from 5 to 15 seconds) and share it as an animated GIF. You’ll be able to share the GIF directly to Facebook, Google Photos, or Weibo using GeForce Experience’s in-game overlay, so you won’t even have to leave the game.

Popular titles like Fortnite Battle Royale and PlayerUnknown’s Battleground already support NVIDIA Highlights, and NVIDIA said that Call of Duty: WWII and Tekken 7 are the latest to add the feature. In addition, Dying Light: Bad Blood and Escape from Tarkov will soon join the list of supported games.

Squee delights in trash talking on Overwatch and sleeping till 5pm on weekends. Few other things matter, except perhaps the next episode of Game of Thrones.
Previous post NVIDIA’s RTX technology lays the groundwork for photorealistic graphics on its Volta GPUs
Next post Interview: Santa Monica Studios’ Aaron Kaufman on the new God of War