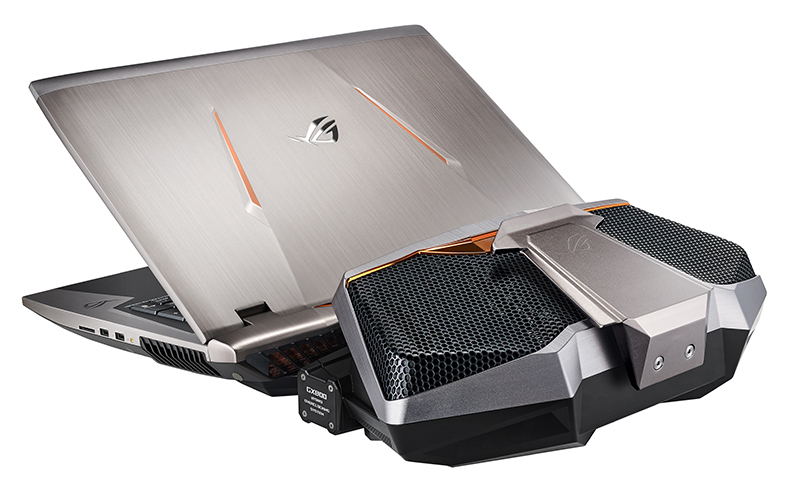 ASUS today announced the local launch of ASUS ROG GX800 gaming laptop, if it can even be called that. This machine shatters performance and price expectations on all fronts, boasting a dedicated liquid-cooling dock, dual NVIDIA GeForce GTX 1080s in SLI, and a built-in RGB mechanical keyboard.

How much does it cost? As it turns out, nothing less than an eye-popping S$9,498. Clearly, this is a laptop targeted at those with the cash to burn.

The ROG GX800 was first announced at Computex last year, and we’ve since had the opportunity to preview the version equipped with an overclockable Intel 6th-generation Skylake processor here. Now, ASUS has updated the laptop with Intel’s latest Kaby Lake processor, giving it a small performance boost.

Here’s a quick overview of the key specifications (you can also check out our unboxing video below):

The most notable improvement coming from the ROG GX700 is the significant jump in GPU performance, and the former only featured a single desktop-class GeForce GTX 980 that was sometimes outclassed by notebooks with two GeForce GTX 980Ms in SLI.

The ROG GX800 is powered by two 330 watt power adapters that supply juice to its 660 watt power supply. Both the processor and dual graphics cards benefit from the liquid cooling system, and coolant is pumped and circulated to the key heat-generating components before flowing back to the dock where two radiators work to dissipate heat.

According to ASUS, using the notebook with the liquid-cooling dock can automatically overclock the processor to a nice 4.3GHz and the GPUs to 2,075MHz, which should afford you a decent performance boost. That said, if you’re looking for a true desktop replacement, the ROG GX800 is pretty much it.

You can buy the ROG GX800 at all ASUS Brand Stores and authorized retailers starting today. From now to 30 June, you’ll also receive a free Xbox One S Halo Wars 2 bundle (1TB) with every purchase of the laptop if you buy it from Hachi.tech.

Squee delights in trash talking on Overwatch and sleeping till 5pm on weekends. Few other things matter, except perhaps the next episode of Game of Thrones.
Previous post Distant Worlds Celebrates 30 Years of Final Fantasy and its Music in Singapore
Next post PlayStation 4 HITS Bundle launches on 3 May for $449, includes Horizon Zero Dawn