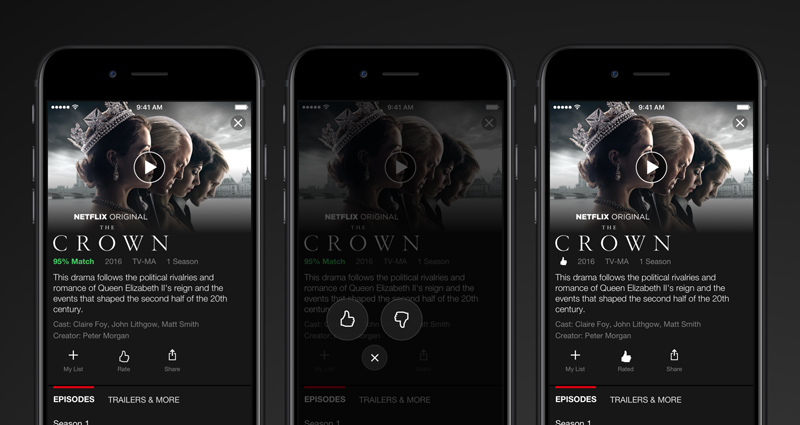 Netflix’s five-star ratings system is an oft misunderstood one, and the streaming company is finally replacing it with a new thumbs up or down system. Starting today, you’ll be able to rate shows by giving them a thumbs up or down, which will help Netflix find similar recommendations for you.

First announced back in March, the new system gives you a little more control over what shows up on your homepage. A thumbs down tells Netflix that you don’t like a particular title and that it should stop suggesting it to you, so it will stop appearing on your homepage.

It also helps that your rating is an affirmative indicator of your preferences, and not an inference drawn by Netflix from what you’ve been watching. According to Netflix, it saw a 200 per cent increase in ratings activity when it tested replacing the stars with thumbs, so the simpler system is clearly encouraging more people to use it.

After all, it’s a lot easier to decide whether or not you like a show than think how many stars it deserves on a five-star scale.

One problem with the old star ratings was that people often mistook it for an objective rating of how good a show was based on other users’ ratings. As it turns out, it was really Netflix’s rating of how much you’d like a show based on your individual viewing behavior, and it varied from user to user.

To avoid further confusion, Netflix has now gone with a personalized percentage “match score” that is a clearer indicator of how much you’ll enjoy a particular title.

But if you’ve provided star ratings in the past, Netflix will still continue to use that data in suggesting content.

Squee delights in trash talking on Overwatch and sleeping till 5pm on weekends. Few other things matter, except perhaps the next episode of Game of Thrones.
Previous post Review: 2Dark is like an old school Alone in the Dark
Next post Taiwanese gamers out in droves at the Wargaming League Season 2 Finals 2017 in Taipei