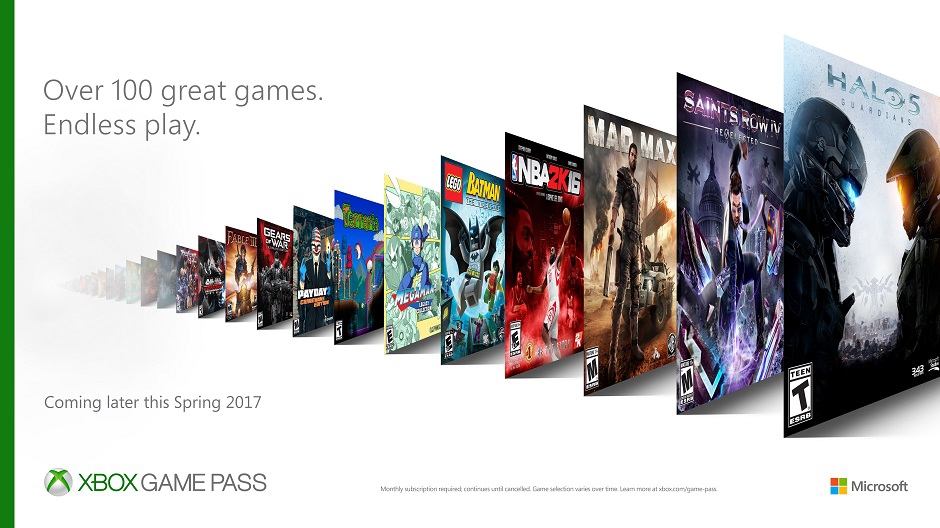 Xbox gamers will soon have the opportunity to play over 100 Xbox One and Xbox 360 games with a Netflix-style monthly subscription.

Called the Xbox Game Pass, the new gaming subscription service will give players unlimited access to current Xbox One as well as Xbox 360 backwards compatible games.

The Xbox Game Pass will begin rolling out to select members of the Xbox Insider Program today. If you’re part of the Xbox Insider Program, you will have access to approximately 20 titles in preview, and many of them Arcade titles. AAA titles such as Halo 5: Guardians are expected to only appear when the program launches to the broader community later this spring (estimate March/April).

There are few couple of things to note.

For one, Xbox 360 backwards compatible games will not be available on the Xbox 360 console via your subscription – the Xbox Game Pass only works for Xbox One and presumably, the upcoming Scorpio console.

Next, any game you buy through the service will be sold to you at a 20 percent discount and lastly, the pass won’t work with Windows 10 devices (at least for now).

This is an interesting shift away from traditional premium gaming on consoles, although the viability of the service will likely depend on the quality of the games offered for download and play every month. Microsoft has stated that games such as Halo 5: Guardians, Saints Row IV Re-Elected, NBA 2K16, Mad Max, LEGO Batman, Mega Man Legacy Collection, Terraria, Payday 2, Gears of War: Ultimate Edition, Fable III, SoulCalibur II and Tekken Tag 2 will be ready at launch.

One big publisher that’s bound to feel the heat is Electronic Arts, which understandably has not signed up with the Xbox Game Pass. Their own competing monthly premium gaming service, EA Access is priced at $6.45 per month, and has a much smaller library of games. EA Access however, do let gamers play some of their AAA titles days ahead of the game’s launch. If Microsoft can mirror that timed exclusivity for Xbox Game Pass titles, or convince EA to jump into the bandwagon, it will be a complete massive coup for the initiative.

Aaron Yip is an industry veteran with more than 15 years of experience. When not spending time on his gaming PC and consoles, he can be found in Hyrule solving ungodly puzzles and collecting gems.
Previous post NVIDIA’s new GeForce GTX 1080 Ti is insanely fast
Next post Warhammer 40K: Deathwatch – Tyranid Invasion Review