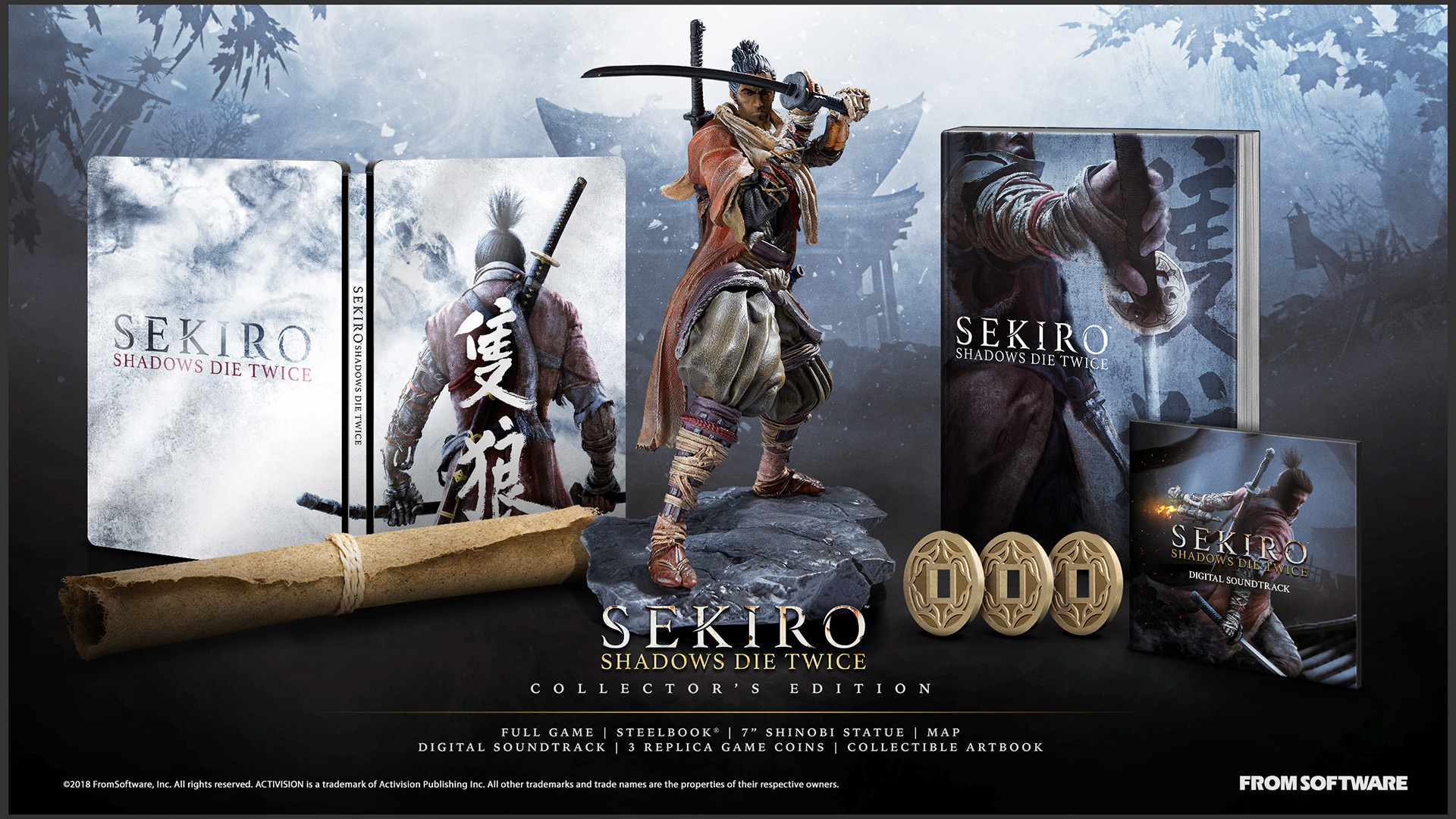 New hero, new locale, same hair-pulling deaths. Gaming masochists are in for a treat once Activision’s Sekiro: Shadows Die Twice, the next original game from Souls-Borne creators FromSoftware, lands on 22 March 2019. PlayStation has dropped the details on local pricing and the various premiums available on PS4, including a confirmed listing of the S$159.90 Collector’s Edition.

Getting the action-adventure RPG early will net buyers a set of digital art and a mini soundtrack. This applies to both the first run of physical copies ($69.90) and the digital editions ($64.90), with the latter’s offer only available until 21 March.

Contents for the Collector’s Edition in Southeast Asia go unchanged so you’re getting all the promised goods: the 18cm-tall Shinobi statue, an art book, a map, replica coins, a digital soundtrack, and a copy of the game in a custom SteelBook.

Apparently they’re offering the same set of artworks for both the pre-order premiums (digital) and the collector’s edition (printed), set to feature concept art for the game.

Sekiro: Shadow Die Twice is the highly-anticipated follow-up to the Souls franchise, last updated on March 2017 with the final DLC for Dark Souls III (our review here). Players are now transported to Sengoku-era Japan, donning the agile boots of Sekiro — the one-armed wolf — as he takes on humans and monstrosities alike. While the game shares obvious roots with the Souls-Borne family, Sekiro:Shadows Die Twice introduces far more mobility and verticality, with a revamped poise system to offset the unlimited stamina.

Our hands-on with the TGS 2018 demo build taught us love, patience, and pain, and the all-too-familiar desire to “git gud” amid the rising tally of deaths. If you loved Demon’s Souls, Dark Souls, or Bloodborne then chances are you’d get a kick out of Sekiro too.

Sekiro: Shadows Die Twice will also launch on PC (published in Asia via Cube Games) and the Xbox One.

Ade thinks there's nothing quite like a good game and a snug headcrab. He grew up with HIDEO KOJIMA's Metal Gear Solid, lives for RPGs, and is waiting for light guns to make their comeback.
Previous post The next Overwatch patch will need a full reinstallation
Next post How I learnt to stop worrying and love the Detective Pikachu trailer