Kingdom Hearts III has a Toy Story World, will arrive in 2018 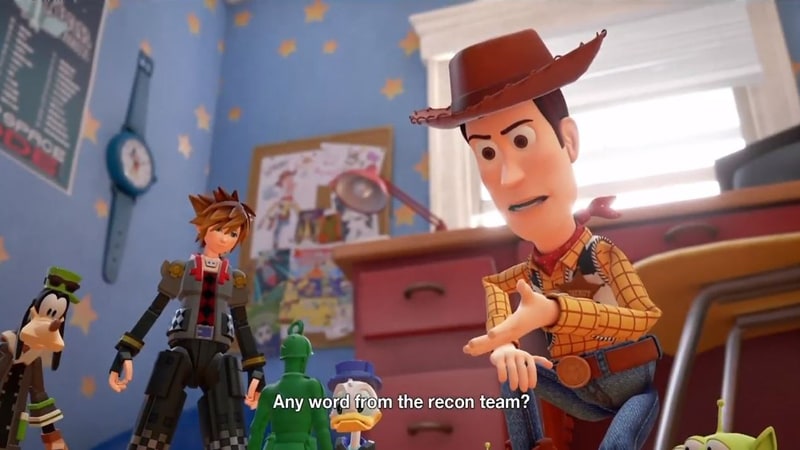 Kingdom Hearts III hits in 2018 and will include a Toy Story world featuring all of your favorite Pixar-themed toys, the developers announced at Disney’s D23 yesterday.

In Kingdom Hearts III, franchise mainstay Sora is joined by Donald Duck, Goofy, King Mickey and Riku as they search for the seven Guardians of the Light. The groups wanderings will take them to many of the same worlds found in previous games along with a slew of new worlds including one based on Tangled, another based on Big Hero 6 and, now, Toy Story.

The new trailer, which you can see below, shows Sora, Donald Duck and Goofy arriving in Andy’s room to join Woody, Buzz Lightyear, Hamm, Rex and Sarge’s investigation into the disappearance of their fellow toys and Andy. They collection of toys are also trying to figure out why the game’s Heartless enemies are showing up in their world.

The world, the first Pixar location ever featured in a Kingdom Hearts game, will include an original storyline, as well as a new look for the Kingdom Hearts heroes, new toys and special Keyblades that transform and give Sora unique attacks.

“At long last, we are excited to open up the Kingdom Hearts universe to include the world of Disney•Pixar’s Toy Story,’” said Tetsuya Nomura, director of the game series. “I’m sure fans have been anticipating the inclusion of this world for many years. The narrative will be an original story exclusive to Kingdom Hearts III, and the gameplay will feel characteristic of the Toy Story style and aesthetic. Please stay tuned for more details to be revealed soon.”

Of course, knowing series director Tetsuya Nomura, “2018″ could turn into 2058 pretty quickly. Let’s just hope it doesn’t turn out that way. The game will be released for Xbox One and PlayStation 4 consoles.