Home / Latest / Games / There’s A Merlion-Inspired Robot in Mighty No. 9

There’s A Merlion-Inspired Robot in Mighty No. 9 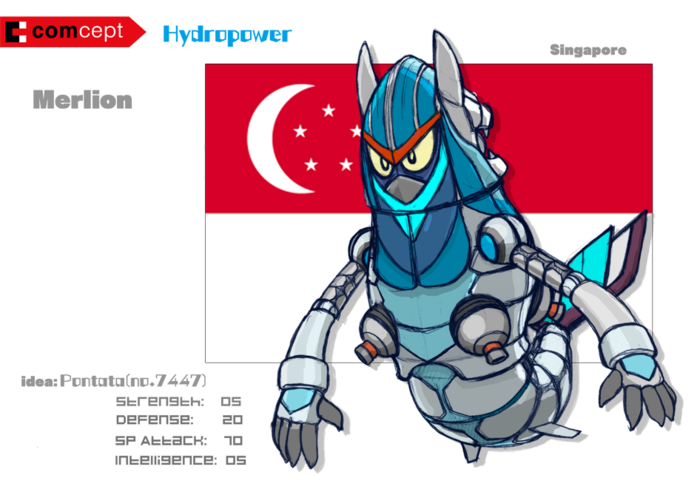 You’re looking at the winning entry of a recent Might No. 9 backer contest after going through some heavy refinements by Keiji Inafune.

The second round of the Kimokimo Cup called for submissions to be “more representative of a particular country,” making our national mascot an easy pick for backer “Mighty No. 7447 Pontata”.

For comparison’s sake, you can see the original submission below.

“No matter how you put it, having the Merlion’s tail in the front would just get in the way. I put the Merlion face on the back of the head so it usually looks like a marlin. The head could even rotate around when it attacks,” reads one of Inafune’s comments.

As for the arms, it was just something that Inafune felt a Battle Colosseum-worthy robot should have. Komikomi decided to add water-jets to the final design so it wouldn’t be limited to just underwater encounters, possibly doubling up as water cannons.

Over on the development side of things, developers Comcept will be releasing the final beta test update soon, implementing some of the changes the community has asked for.

What do you think? After years of being used as a prop for pseudo-vomiting photos, it looks like our mythical guardian has finally gotten afresh look. The rotating head sounds like a really cool idea, potentially as a set-up for an ultimate attack or an alternative fighting mode.

Mighty No. 9, the crowdfunded spiritual successor to Mega Man (and also one of the first to use Kickstarter in Japan), is expected to release in April 2015 for multiple platforms, including the Wii U and handhelds like the Nintendo 3DS and PlayStation Vita.

Ade thinks there's nothing quite like a good game and a snug headcrab. He grew up with HIDEO KOJIMA's Metal Gear Solid, lives for RPGs, and is waiting for light guns to make their comeback.
Previous post Ticket Sales Open for PAX Australia 2015
Next post Ant Sim Formicarium on Kickstarter