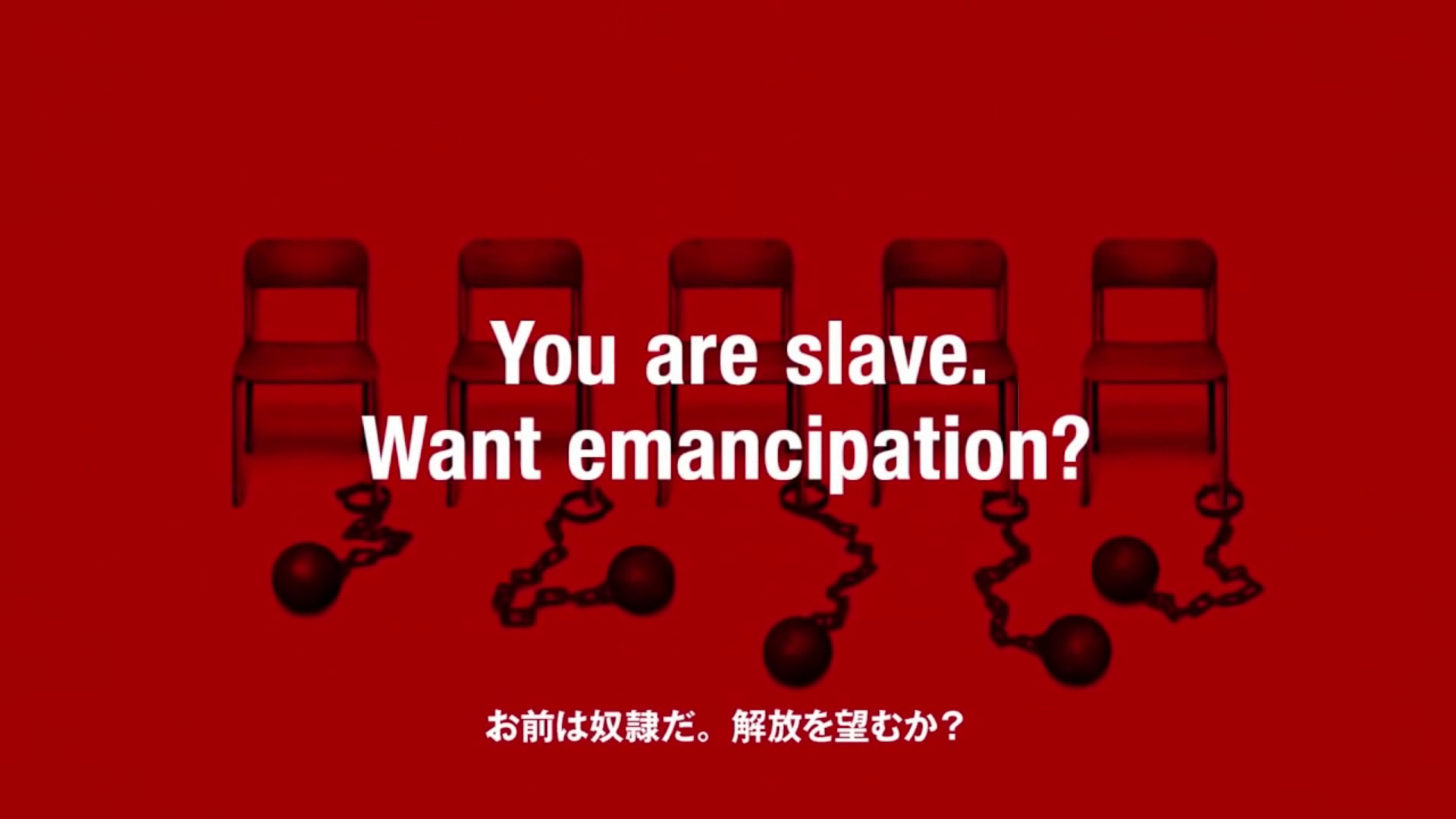 Since its cryptic reveal back in November 2013, Atlus’ Persona 5 has left the world wondering what the next big JRPG is all about. An image of chairs bound by a ball-and-chain, overlaid with text about slaves and emancipation, isn’t all that revelatory. Series director Katsura Hashino decided to explain the themes behind it, all the while managing to remain completely vague about the game itself.

The Persona games have always addressed mature themes and philosophy so the series’ next entry will be no different. In an interview with Persona Magazine (helpfully translated by Pepsiman), Hashino had this to say (emphasis added):

It’s going to be a while yet before we’re ready to put out the game proper, but I think that image at least reassures people that there is something definitely coming along. To answer your question more directly, I feel that in today’s world, there’s no shortage of people that are bored and discontent with their lives. They’re at a dead end, chained down to a world of which they resent being a part. Persona 5, in that sense, is a game about freedom, the kind that those sorts of people haven’t had living in the real world. I want them to be able to attain that sensation by playing through the game. Looking at it from that angle, I’d say that the image depicts the way that must be endured for that moment of freedom to arrive.

Comparisons to earlier games inevitably come up, with Hashino saying that Persona 3 and 4 were about finding a freedom that you only get by banding with others. In Persona 5, the theme focused more on the individual self.

We live in a time here in Japan where both teenagers and adults, regardless of who they are, can’t just be idling their way through their lives. The world isn’t a place that lets you be all that passive if you want to get things done and make something of your life. People have to be on their toes, thinking about and engaging with what’s happening around them.

We want them to play our game and come away feeling like they’ve found a renewed sense of self and understanding that they can’t be apathetic towards what’s going on in society.

Do check out the full interview to read a little more in his thoughts. It’s bereft of hard-hitting gameplay and technical facts but do remember that the game only releases in winter 2014 for Japan, making the wait for an English version even longer. Perhaps the less we know now the better.

Persona 5 will be available on the PlayStation 3.

Ade thinks there's nothing quite like a good game and a snug headcrab. He grew up with HIDEO KOJIMA's Metal Gear Solid, lives for RPGs, and is waiting for light guns to make their comeback.
Previous post Help Take Part in Cancer Research with This Mobile Game
Next post World Cyber Games Bids Goodbye