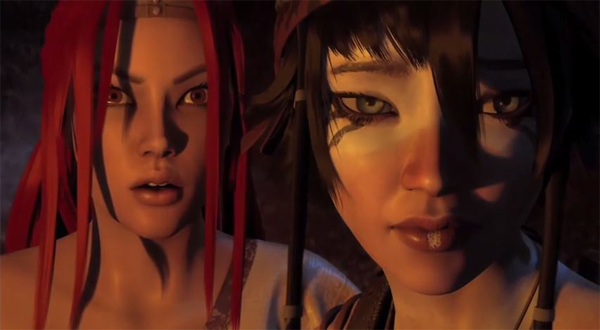 Fiery red-head Nariko will be gracing our screens once again, only this time as a CG animated movie set to release worldwide in 2014.

Ninja Theory’s Heavenly Sword remains as a highlight of the PlayStation 3’s early years. Released in 2007, the game had everything that helped define what we now call current-gen. It had an orchestral soundtrack, actors doing motion-capture and it even made use of motion control to alter an arrow’s trajectory, which was fun enough at the time. Above all else, Heavenly Sword had an intriguing story and cast, introduced a memorable heroine, and was just a blast to play. It’s too bad that for such a great new IP we never got to see a sequel, despite the story being already written.

The movie is produced by Blockade Entertainment, the same folks working on the Ratchet & Clank movie, with CGI animation by AZworks. Based on the game’s events, Heavenly Sword is a tale of revenge where Nariko must seek vengeance upon the invading King Bohan and his army before the titular, omnipotent weapon she wields consumes her life. Anna Torv will be returning as Nariko, while Alfred Molina will replace Andy Serkis as King Bohan (due to scheduling conflicts). Nariko’s sister, Kai, will be handled by Ashleigh Ball.

Apparently the movie was well received at the Cannes Film Festival earlier this year, which is why there’ll be theatrical screenings in select markets. I doubt there’ll be one over here so look out for the digital release set for Spring 2014.

The quality admittedly looks rough but a six-year wait tends to make you more forgiving. Now they just need to put a trailer for Heavenly Sword 2 at the end of the film’s credits, preferably with Ninja Theory’s logo attached.

Ade thinks there's nothing quite like a good game and a snug headcrab. He grew up with HIDEO KOJIMA's Metal Gear Solid, lives for RPGs, and is waiting for light guns to make their comeback.
Previous post The New Units in XCOM: Enemy Within – Part I
Next post Batman, Scribblenauts and F.E.A.R. in the Humble WB Games Bundle