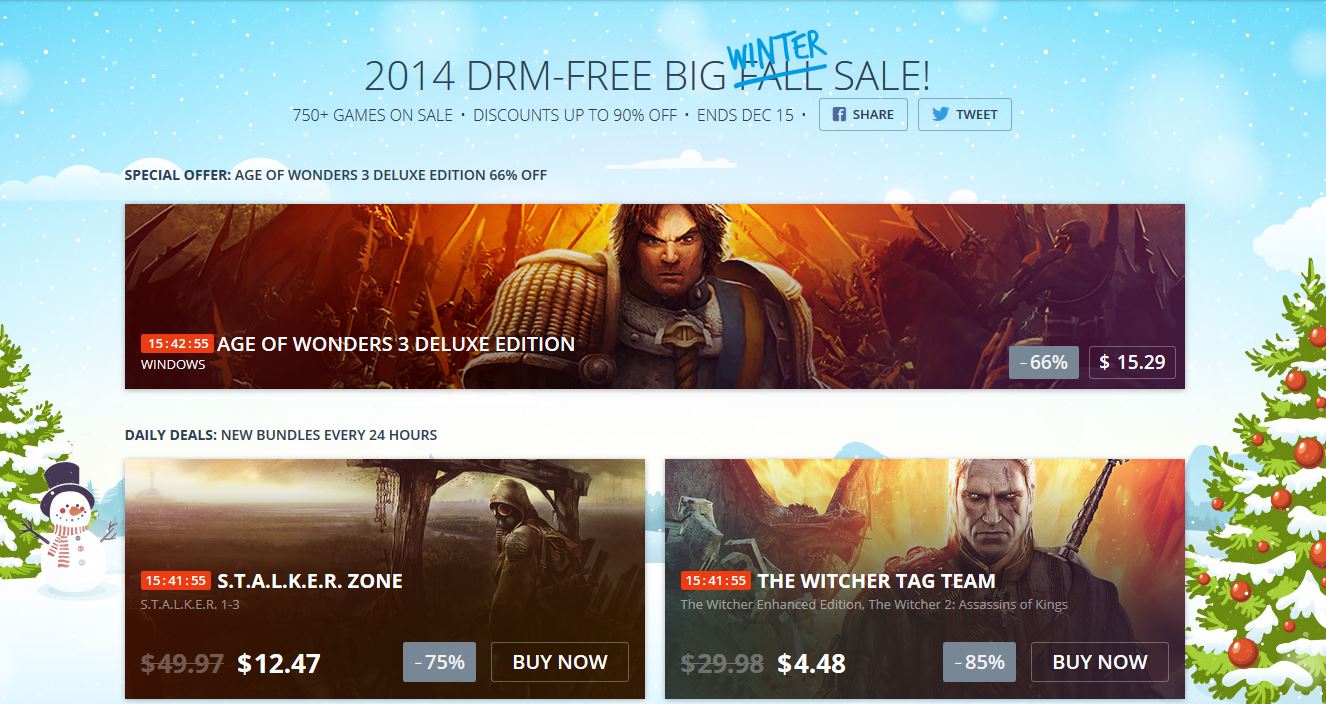 There’s no rest for the bargain-hunter. Just as we’re recuperating from a string of sales along comes another waving the GOG.com banner and a cart full of DRM-free games. It’s time for their Big Winter Sale and they’re rolling out the big discounts.

First things first: they’re giving out the 4X strategy game Age of Wonders for free and stocks are running out fast! The pool of 250,000 copies has been whittled down to just over 100,000 by 6am so you’ll want to get that done quick. Just visit GOG.com and scroll down to the middle or so and redeem a copy with your account.

Following that you may want to consider Age of Wonders III Deluxe Edition, released only in March this year and now going at 66% off.

Next on the plate is their 48-Hour Frost Flash Frenzy, where a new set of deals will be introduced hourly. Thankfully you don’t have to check back every hour, as they list the new ones five hours in advance.

Lastly we have the Daily Deals which consists of four bundles. You may want to pick up The Witcher and its sequel for only USD4.48 in preparation for The Witcher 3: Wild Hunt (I highly recommend the books too for bonus source material knowledge). There’s also a pack for all three S.T.A.L.K.E.R. games, ever the cult favourite – there’s a plethora of mods out there to further improve your scrounging experience.

There’s more being discounted of course but this being a sale, there’s no reason to jump the game and pick something not being featured.

Ade thinks there's nothing quite like a good game and a snug headcrab. He grew up with HIDEO KOJIMA's Metal Gear Solid, lives for RPGs, and is waiting for light guns to make their comeback.
Previous post Got an EA Mobile Game Installed? Log In For Free Gifts!
Next post Lizard Squad Promises to Close Down Xbox Live Forever; Gets Hacked by Anonymous