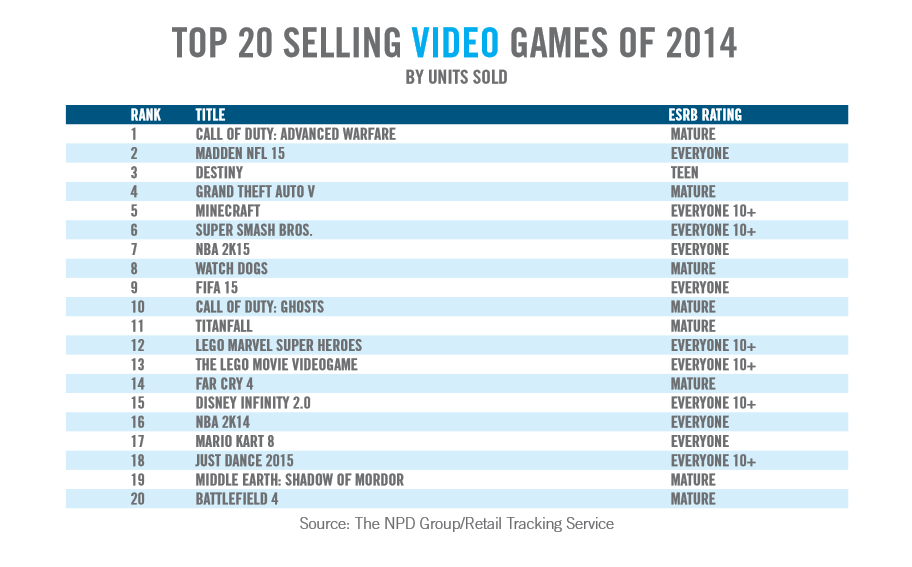 The ESA has publicly released a report titled “2015 Essential Facts About the Computer and Video Game Industry” (via MCV Pacific) that sheds some interesting data based on the US market.

The ESA – which in this case refers to the Entertainment Software Association and not European Space Agency – has been in the business since 1994, although it only went by its current name since 2003. Think of any major gaming publisher in the world and chances are you’ll find them listed as a member. In fact they are the trade association that runs E3 every year, making their findings pretty darn relevant.

Just to be clear: While we casually use the term “videogames” to mean both consoles and PC these days, the ESA considers them as separate entities.

The report opens with a foreword by ESA president and CEO, Michael D. Gallagher: “Video games are ingrained in our culture. Driven by some of the most innovative minds in the tech sector, our industry’s unprecedented leaps in software and hardware engages and inspires our diverse global audience. Our artists and creators continue to push the entertainment envelope, ensuring that our industry will maintain its upward trajectory for years to come.”

The important bits are broken into three categories, exploring who plays and buys what types of games, the different platforms, parents and gaming, as well as look at sales figures for the year 2014. There are only 20 pages so don’t expect in-depth analysis compared to paid reports.

We now know that the average US gamer is 35 years old, with there being more female gamers aged 18 or over (33%) than boys aged 18 and under (15%). That’s hardly a surprise considering the proliferation of accessible mobile games, though it is unfortunate we don’t get revenue numbers that distinguish between platforms – at the moment, mobile apps are lumped together with digital games, add-on content, and subscriptions.

Total consumer spending in the US for 2014 was US$$22B. By contrast, Newzoo estimates show that China raked in $17.8B, followed by Japan with $12B. Singaporeans on the other hand spent $84M.

What’s interesting is that 79% of parents make active use of parental controls in new consoles, with 94% taking note of what their kids are playing, and 63% saying that games play a positive part.

In any case, if you like statistics and graphs you’ll find a copy of the report for viewing or download here.

Ade thinks there's nothing quite like a good game and a snug headcrab. He grew up with HIDEO KOJIMA's Metal Gear Solid, lives for RPGs, and is waiting for light guns to make their comeback.
Previous post World of Tanks Blitz Gets Battle Missions
Next post Wadjet Eye Goes Cyberpunk for Its Next Game