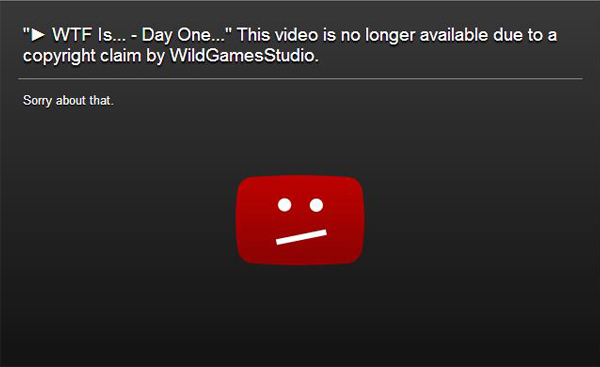 In an unfortunate turn of events, a developer has apparently used YouTube’s copyright claim service to remove a top-ranking video critique of their game.

John “Totalbiscuit” Bain covered Day One: Garry’s Incident as part of his influential “WTF Is…” series of first impressions. The video pointed out a handful of shortcomings the game had, ultimately advising viewers against making a purchase. The turning point came last week when a copyright strike was made against said video, with the claimant being none other than the developers, Wild Games Studio.

Whatever your stance on Totalbiscuit, his latest video explains the situation in detail and, more importantly, goes into how this isn’t an isolated incident. The crux of the matter lies in how easy it is for a company to remove YouTube content they do not like and how it can be used to silence legitimate criticism of a product. It’s especially damning when review code was provided for in the first place.

Skip to 09:13 if you’re only interested in hearing about the larger problem at hand.

Following the fallout that has occurred in the hours since, Wild Games has responded via Kotaku saying that they’ll withdraw their YouTube complaint. A little too late to get back in the good graces of public opinion, but at least the matter didn’t spiral into legal territory.

If you’d like to see the the original video, there’s a mirror available on Dailymotion.

Ade thinks there's nothing quite like a good game and a snug headcrab. He grew up with HIDEO KOJIMA's Metal Gear Solid, lives for RPGs, and is waiting for light guns to make their comeback.
Previous post GeForce Experience Update Introduces Free Gameplay Capture Tool [Updated]
Next post Go Back to 1995 with PlayStation Memories