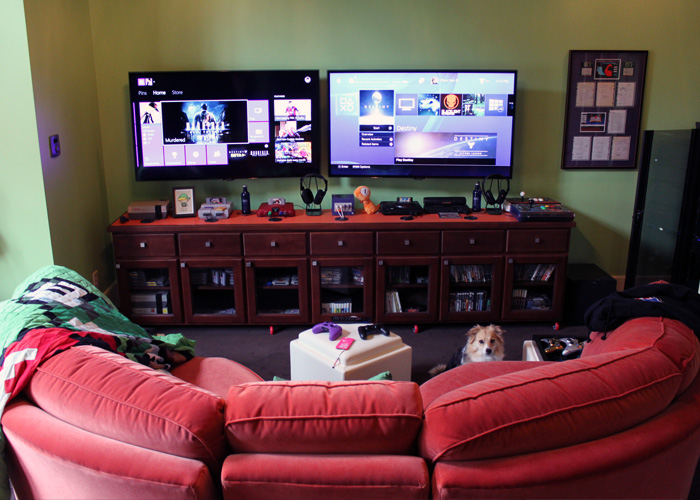 As with movie buffs and their home theaters, gamers too have our points of pride. From PC battlestations to cockpit replicas, we’ve seen all manner of impressive things lovingly put together by the gaming community. This time we take a peek into the home of game developer Cliff Bleszinski and his “co-op buddy for life”, Lauren.

Split-screen gaming isn’t as common as it used to be, prompting the two to design the space you see right now. While it’s basically double the investment in terms of hardware, it sure beats limiting yourselves to a few games. The two have been playing Destiny lately which not only  has co-op but competitive multiplayer. So what do you do then?

Thanks to the wonders of wall-mounts and side seating, any chance of “screen cheating” is completely negated. It may seem a little messy but it works and, most importantly, doesn’t require a whole deal of effort to set up.

The cabinet is custom-made to keep all the older consoles and their games, while newer machines get stored in a pair of server racks in a corner. Everything is hooked up together using the Control 4 home automation system thus no swapping of cables required.

Like any fan of games they don’t restrict themselves to just consoles either, so a couch doubles up for handheld duty while their living room houses the motion-sensing stuff.  Even their computer desks are placed facing each other.

There are a lot more photos where this came from (plenty of memorabilia) so go check out Lauren’s blog post. I hope you get a few inspirational ideas from it too!

Ade thinks there's nothing quite like a good game and a snug headcrab. He grew up with HIDEO KOJIMA's Metal Gear Solid, lives for RPGs, and is waiting for light guns to make their comeback.
Previous post 2K Games Evolve Big Alpha Access!
Next post Get Nostalgic With Icewind Dale: Enhanced Edition Later This Month