Path of Exile Gets Published In Singapore and Malaysia 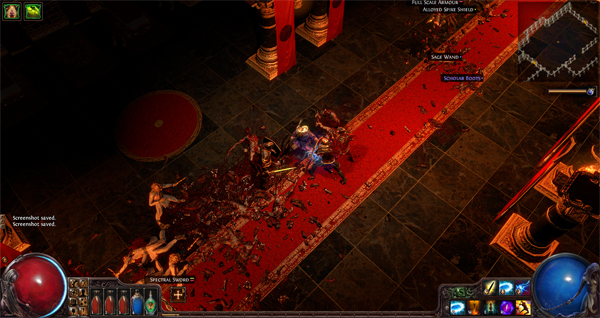 Garena has entered a licensing partnership with Grinding Gear Games to publish Path of Exile in Singapore and Malaysia, with a Closed Beta scheduled for 14 November.

On some corners of the internet you might hear Path of Exile being hailed as the game that Diablo III could have been. While Blizzard’s attempts at innovating (and streamlining) the action-RPG left an unpleasant taste in some mouths, Path of Exile is unabashedly everything you’ve come to expect from the genre: a dark and moody atmosphere, copious gore and a skill tree worthy of the “customisation” label.

It might sound familiar because Path of Exile made headlines not too long ago for launching after an extended beta testing period. In fact, you can play it right now (it’s free-to-play) at www.pathofexile.com as there are no international limitations. Which begs the question: what does Garena’s version bring to the table?

Lead Designer and Managing Director of Grinding Gear Games, Chris Wilson, explained in a forum announcement that the new server will house a realm that’s separate from the worldwide version, although they will not be imposing any IP restrictions should users choose to stick with the latter. However he didn’t address whether the official Singapore gateway – which players in Southeast Asia have been using thus far – will remain in service once the Garena version goes live.

Wilson says that breaking into the Asian markets is difficult, requiring alternative payment methods or cultural tweaks. “We expect that this partnership will both expose millions more gamers to Path of Exile but also introduce them to a version that is appropriate for the culture and language of their territory.” It’s a strange comment seeing how Singapore and Malaysia use English just fine, but the Garena FAQ mentions they’ll support other languages after release so there’s that.

The user response in that announcement thread is worth pointing out, as there’s been a number of fans based in SEA who are dismayed with the decision. Should things go awry, there’s always the prospect of falling back to the worldwide realm.

We’ll take a look at the Closed Beta to see if there’s any discernible difference between the two servers and whether characters can migrate freely. Publishers aside, Path of Exile is a worthwhile look if you’re longing for some click-kill-loot action. It’s been a year since Diablo III or Torchlight II released, so why don’t you put that left mouse button through its paces?

After all, this skill tree isn’t going to fill itself up:

The official SEA page can be found here.1

Ade thinks there's nothing quite like a good game and a snug headcrab. He grew up with HIDEO KOJIMA's Metal Gear Solid, lives for RPGs, and is waiting for light guns to make their comeback.
Previous post Batman, Scribblenauts and F.E.A.R. in the Humble WB Games Bundle
Next post Singapore Gets New PlayStation Vita on 14 November, Priced SG$299