A Humble THQ Bundle Has Appeared 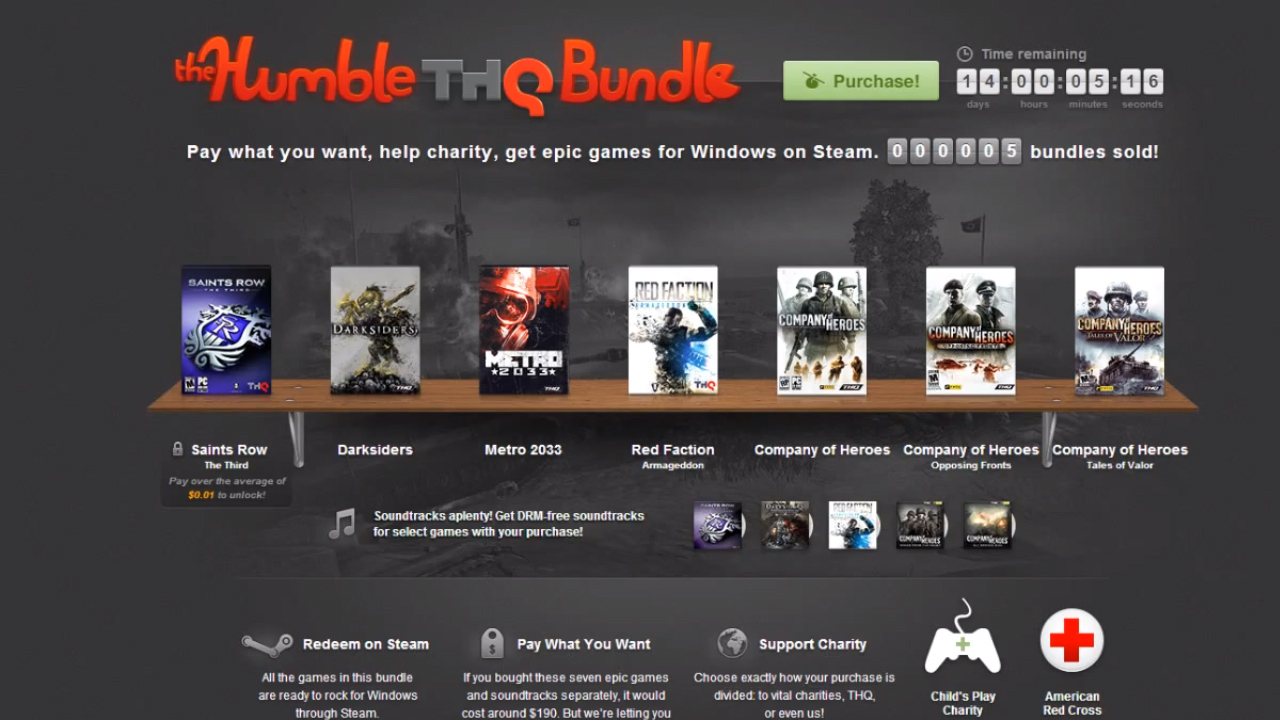 The Humble Bundle has a reputation that precedes itself, bringing a number of great indie titles together for a price decided by the customer. Thus, for as low as US$1 you could find yourself with a selection of games that would normally cost you over US$35 at the very least. They’re transparent about the prices too, allowing you to choose exactly how much each party — the developers, a charity and the HB website itself — gets from your contribution. It’s an idea built around good faith and many customers have opted to pay a lot more than just a dollar. They’ve even been known to have bundles for music and books too. Now, to the surprise of everyone, they’ve got one set up with publisher THQ.

So what titles are we looking at? We have Darksiders, an action-adventure game where you play as War, one of the Four Horsemen of the Apocalypse; there’s Metro 2033, a first-person-shooter set mostly within the metro tunnels of post-apocalyptic Moscow; Red Faction: Armageddon sees the shooter action from a third-person perspective and features destructible environments; the complete Company of Heroes package, a highly acclaimed World War II real-time-strategy with a focus on squad tactics; and star of the show, Saints Row: The Third, an open-world game that (refreshingly) smacks you in the face with its brand of entertainment.

Have I mentioned it comes with soundtracks too?

It’s a very strong line-up and showcases some of the best games in THQ’s history. It’s a great opportunity to pick-up these titles if you haven’t already, and you could even gift the Bundle to a friend – SR:TT and CoH supports multiplayer. You’ll need to pay above the average price — currently US$5.73 — to get SR:TT though, which is nothing to complain about really. These are all Windows only and must be redeemed through Steam. Take note that only SR:TT comes with it’s own key as everything else is packed together, excluding the soundtracks.

It’s a smart move by THQ, capitalizing on the fact that most of these games don’t do so well individually now, considering the number of Steam sales they’ve been through. It also sets up the audience for the release of Company of Heroes 2 and Metro: Last Light, next on the release pipeline. More importantly, however, is the boost to the company’s financial situation, having recently entered a forbearance agreement to extend THQ’s debt deadline. Their stock prices increased by 37.96% today, injecting some hope into an otherwise grim scenario.

While THQ’s future is still uncertain, the value behind this deal is obvious to all (despite Humble Bundle, known for an indie focus and DRM-free offerings, raising a few eyebrows over this move).  Head over now to take a look for yourself.

Ade thinks there's nothing quite like a good game and a snug headcrab. He grew up with HIDEO KOJIMA's Metal Gear Solid, lives for RPGs, and is waiting for light guns to make their comeback.
Previous post IEM Singapore: Grubby Talks Pro Gaming
Next post The AVerMedia C985 PCIe Live Gamer HD Capture Card Review