Speedtest owner Ookla — yes, the same Speedtest we all love to christen new broadband plans with — says Singapore is the 4th best gaming city when it comes to latency. Our sunny island placed behind chart-leader Bucharest, Romania, and Chinese cities Hangzhou and Chengdu. For those wondering, esports capital South Korea ranked 5th and 6th.

If not clinching first bruised any national and/or Asian pride, take heart in the fact that Ookla also says Singapore had the fastest download speed among the cities they considered.

Here are the results for the top 11, with the full results available on their blog: 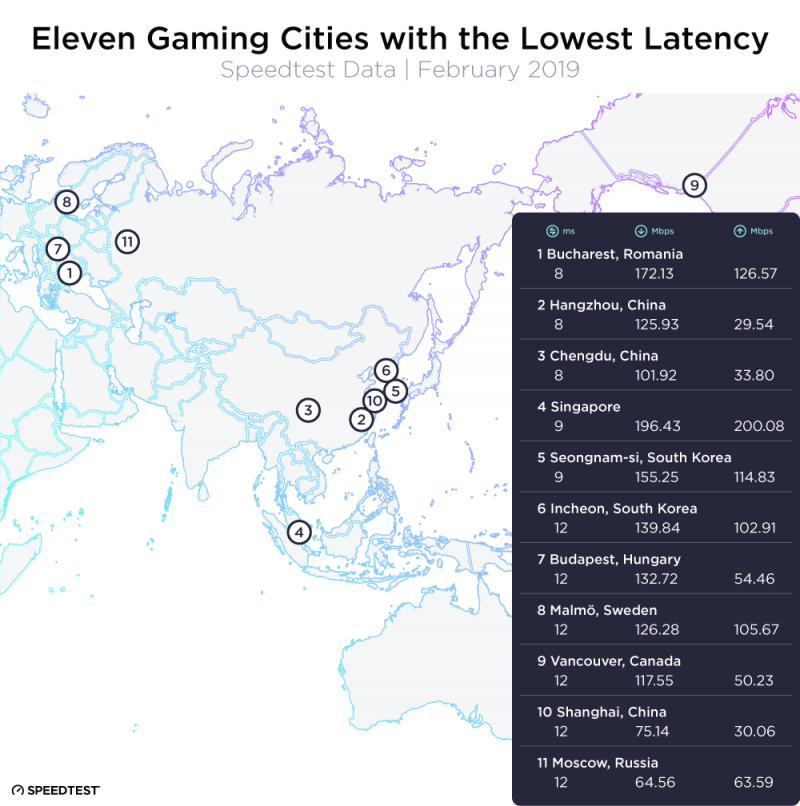 There are, of course, a few points to consider.

First on anyone’s mind is what exactly constitutes a gaming city, and here Ookla states that they looked at “35 cities that are known for their esports events, gaming conferences, game companies and more.” As noted in the above graphic, they then used Feb 2019 Speedtest results to crunch those numbers.

What it doesn’t mention is the nature of those results, as Speedtest automatically locates a geographically optimal server so consumers have some idea of their network performance. While it’s useful for comparing results between internet providers, it’s not at all indicative of how your gaming connection might fare. Singapore has it good when it comes to datacenters, but a fair number of game servers are still hosted overseas — you just can’t beat distance. It’s why ISPs like MyRepublic and ViewQwest, as well as services such as WTFast, promote latency-based routing to optimize gaming traffic.

It doesn’t end there. Look to Netflix’s own speed test platform, Fast, for an idea of your unloaded and loaded latency — the second is what latency actually looks like with your home’s network traffic and added latency from devices.

So what makes this useful?

I point you to Google Stadia. While Speedtest results are not definitive and likely coloured by the network-savvy and ego-stroking crowd, it does show that Singapore is on solid ground to take on game streaming. The fact that cities from the US and UK rank lower in the list does point to the poorer broadband plans and local infrastructure that gamers there contend with, a fact they’ve made vocal in the wake of Google’s announcement.

Unfortunately, Asia — let alone Southeast Asia — weren’t even mentioned in the initial roll-out for Stadia (with China being the understandable exception here), so Google are going to have to pull off some impressive networking voodoo to wow whose early territories.

Or, you know, consider bringing it here sooner rather than later.

In any case, this does give our neighbours cause for some major eye-rolling the next time they hear a Singaporean gamer complaining about the lag.

Ade thinks there's nothing quite like a good game and a snug headcrab. He grew up with HIDEO KOJIMA's Metal Gear Solid, lives for RPGs, and is waiting for light guns to make their comeback.
Previous post New study shows Singaporeans are among the most frequent gamers worldwide
Next post KONAMI celebrates 50 years with a good old throwback collection!