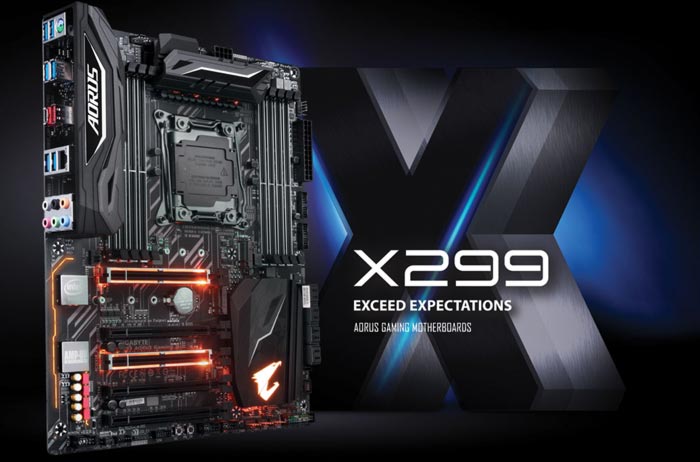 With the launch of Intel’s latest Core-X Series CPUs, it is just a matter of time before motherboard makers announce their own Intel X299 solutions. One such manufacturer is Gigabyte, as they announced the X299 AORUS Gaming series of gaming motherboards at Computex. Let’s take a look at what the new motherboards bring to desktop gaming.

According to Gigabyte’s press release, the X299 series offers improvements over their predecessors that include; ESS Sabre audio and ASmedia ASM3142 USB 3.1, RGB Fusion with Digital LEDs, Smart Fan 5 with Fan Stop, and M.2 support. Add to the above redesigned black armor and a black PCB for a new look. Gigabyte has reinforced the X299 Gaming series PCBs to reduce any strain effects from powerful and heavy graphics cards, coolers, and so on.

RGB is still a big thing for gaming motherboards in 2017 (apparently, gamers love them), so the top-end AORUS Gaming boards, the Gaming 9 and Gaming 7 will have Gigabyte’s RGB Fusion plus onboard LEDs. These features boast up to 8 lighting patterns and individually addressable LEDs plus support for 5v/12v lighting strips via the Digital LED headers. You can literally turn this into a Christmas tree.

Gigabyte will release these boards in June. Pricing has not been announced yet, but watch this space.

Aaron Yip is an industry veteran with more than 15 years of experience. When not spending time on his gaming PC and consoles, he can be found in Hyrule solving ungodly puzzles and collecting gems.
Previous post This weekend’s Wargaming League Grand Finals 2017
Next post Injustice 2 (PS4): Setting the new benchmark for fighting game content