Hello, mercenary person. Do you feel you have a lot of time and not enough Borderlands 3?

First and foremost, if you read that line in Sir Hammerlock’s voice, I’m really proud of you.

Jokes aside, developer Gearbox Software has released yet another trailer for the much-awaited title, this time providing a brief glimpse of the planet Promethea. Have a look below; it’s only around 40 seconds long!

Visit Promethea. Home to the Atlas corporation, this metropolitan city-planet has been brought under siege by Maliwan, turning its futuristic urban environment into a brutal warzone. #LetsMakeSomeMayhem
Learn more: https://t.co/4Zgrwk0h4f pic.twitter.com/enrdl5HuWd

Lore-wise, Promethea was hinted at long before the first teasers for Borderlands 3 appeared. And as it turns out, it’s one of the locations our Vault Hunter pals will be visiting along the way. What’s more interesting, however, is the fact that Rhys, the protagonist from Tales of the Borderlands, not only runs the planet but also sports a surname.

No, I am not. It’s literally stated in the video, and it is downright hilarious. 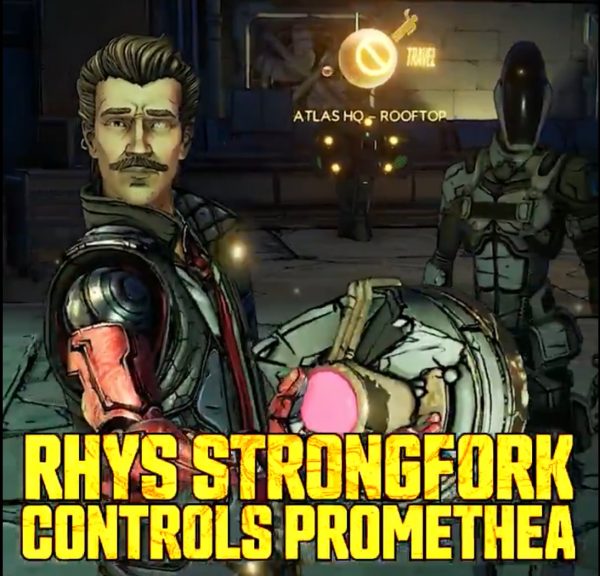 Seriously, Rhys? Of all the terms you could have used to pair with “strength”, you chose a fork? Have you been smoking Eridium or something?

Speaking of Eridium, the trailer drops a few more tidbits on that. Apparently, Promethea was where the mysterious alien element was discovered and weaponized by the Atlas Corporation, which Rhys currently controls (play Tales to learn how that happened).

More interestingly, it also mentions that Atlas Corp is at war with Maliwan, one of the many weapons manufacturers in the Borderlands universe. For those who need a reminder, the latter only produces elemental weapons, topped off with a futuristic, sci-fi vibe.

Why are the two corporate giants clashing? Why did Rhys pick such a daft surname?

But more importantly, why isn’t September 13 here yet?

Kenneth is your dedicated jack of all trades gamer and borderline anime nut. When not writing, he likes to wind down with Overwatch, Apex Legends and a bit of Fate: Grand Order on the side.
Previous post TI9 prize pool soars past the Fortnite World Cup at US$30M and counting
Next post HP’s OMEN Challenger Series returns to APAC with US$50K prize pool