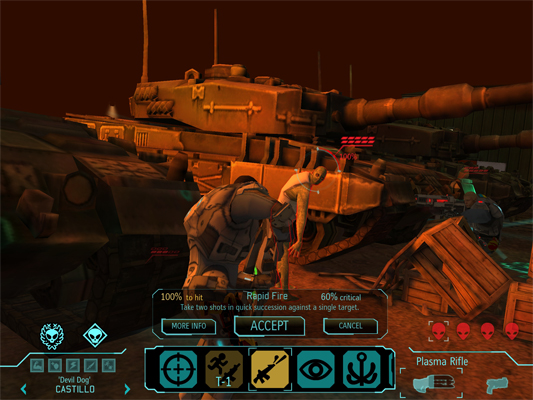 2K and Firaxis Games’ award-winning modernisation of the legendary XCOM series is now available for iOS devices. Considering how it’s touted as a faithful port of the PC version, this is well worth your time if you haven’t already played this.

XCOM: Enemy Unknown is a turn-based strategy game that pits you as the commander of a secret, international taskforce designed to respond to extraterrestrial threats. Unfortunately this happens to be the first alien invasion – ever. Needless to say first contact doesn’t go so well, with the enemy forces packing better weapons and even psychic powers.

There have been a few changes from the 1994 original of course, aside from the obvious shift to 3D. Most notably, the game has a far easier approach when it comes to base management: there’s only one headquarters you need to concern yourself with, neither will there be any attacks on your base. Thankfully, the ruthlessness will still be present: you will lose soldiers, you will find yourself making hard decisions and you will have to make sacrifices (unless you’re playing on Easy and, to an extent, Normal difficulty).

We’ve praised the PC version in our review although it did have a fair number of frustrations.  The iOS version will come optimised for touch controls and will include GameCenter and iCloud support, meaning save games transfer across devices. Since this is a turn-based game it’ll be a natural fit for mobile too. There isn’t any multiplayer at the moment but the developers promise it’ll be added as a free update at a later date.

XCOM: Enemy Unknown for iOS is on the App Store for a hefty SG$25.98. The PC version will likely be cheaper than that during sales so it’s just a matter of platform preference. Do note that this app is only compatible for iPad 2 onwards, iPad Mini, iPod Touch 5 and iPhone 4S and up.

Good luck, Commander. And remember, we will be watching.

Ade thinks there's nothing quite like a good game and a snug headcrab. He grew up with HIDEO KOJIMA's Metal Gear Solid, lives for RPGs, and is waiting for light guns to make their comeback.
Previous post Company of Heroes 2 Dev Diary on Multiplayer
Next post Chaos Online’s Cash Shop Opens with Double Boost Event