XBL Gold Jan ’18: Van Hellsing III, Back to the Future, and more 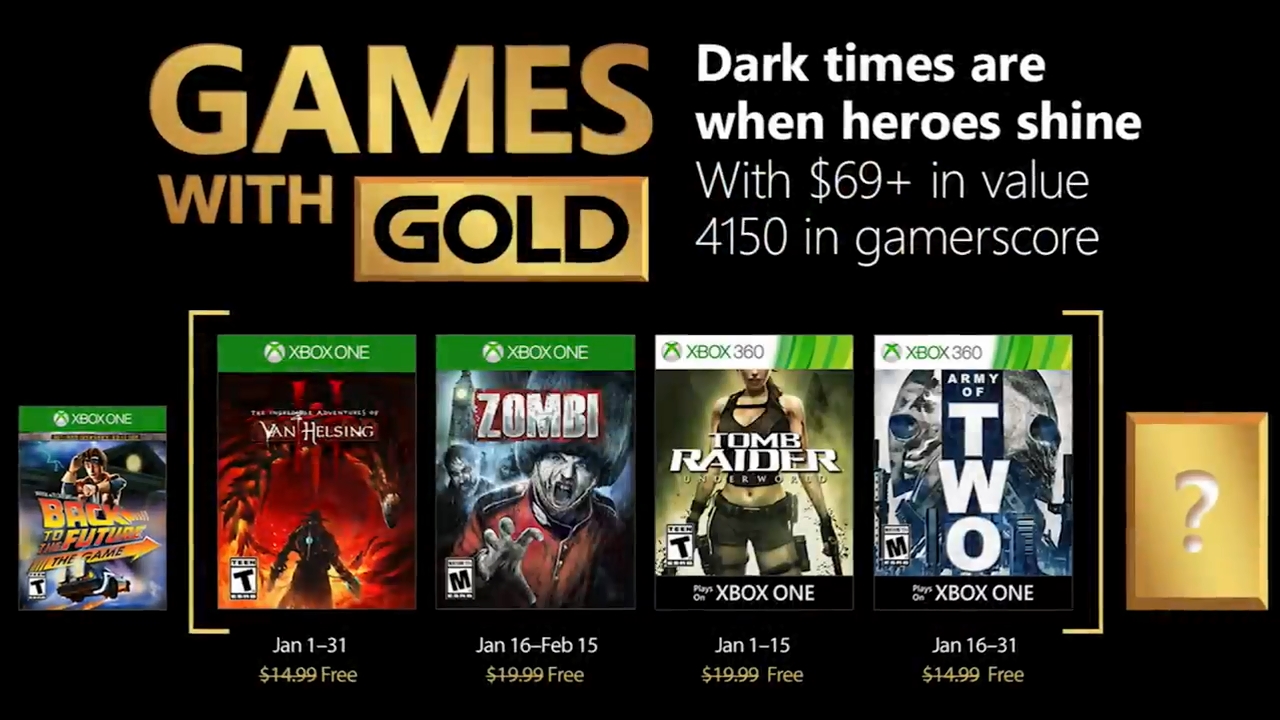 It’s a fresh year and a fresh start for Microsoft, as all eyes turn to the company’s software offerings for 2018. We begin with the , with the next batch slated to go live on 16 January.

The Incredible Adventures of Van Hellsing III [Xbox One]

Store Description
In Borgovia, the war is over, but the future looks grim. The city of weird science is in ruins, squabbling factions and criminals fight for power and a strange cult prophesizes the coming of “the end times.” And they might be just right: a wave of uncanny events shakes the land, and it’s all connected to a mysterious creature, a former ally turned into a fearful arch-villain. Which means that Van Helsing will do what he does best: he grabs his weapons, prepares his deadly tricks, and hunts down the most dangerous monster who has ever lived… and this time it’s personal.

Should You Play It?
Maybe; you’ll have to keep your expectations in check. The third and final entry in the Van Hellsing series deviates from its predecessors by simplifying gameplay systems, a move that leaves it decidedly weaker. The journey also doesn’t leave much of an impression, with returning players treading old areas. In the end, it’s all somewhat saved by the humor, dialogue, and most importantly the online co-op. Newcomers are better served going for the complete Final Cut trilogy instead.

Back to the Future: The Game — 30th Anniversary Edition [Xbox One]

Store Description
Six months after Back to the Future Part III, the DeLorean time machine mysteriously returns to Hill Valley – driverless! Marty McFly must once again go back in time, or else the space-time continuum will be forever unraveled! Includes an exclusive retrospective behind the scenes video, featuring an interview with Bob Gale, and others involved in the creation of the game!

Should You Play It?
Yes. Before Telltale shot to fame with The Walking Dead: The Game, and before they turned into the industry-wide safe choice for licensed adaptations, the indie developer saw plenty of success with their five-episode take on Back to the Future. The characters are believable, the writing is a good fit, and the voice-acting is particularly impressive — be it Christopher Lloyd’s reprisal as Doc Brown or A.J. Locascio’s impersonation of Marty McFly. It’s certainly worth your time for both its nostalgia and entertainment value.

Store Description
London is falling. Are you prepared? The Last Blight is upon us. It was foretold. For the second time in history, a great plague has shrouded London in a fog of death. Big Ben tolls as thousands of unprepared die, or worse, are infected by a sickness more gruesome than death. You’re still breathing, for now, but how long will you survive the labyrinth of London’s streets and underground canals, abandoned by the outside world and surrounded by infected?

Should You Play It?
Yes. Ubisoft’s little zombie game defied expectations with its simple yet highly effective slog for survival, leading to ports of the former WiiU exclusive. Thematically, the game leans more towards caution and scarcity rather than action-packed shootouts, with a steady sense of progress that keeps you just out of reach of undeath. There’s also a neat respawn mechanic that involves tracing your footsteps and killing your fallen predecessor.

Ade thinks there's nothing quite like a good game and a snug headcrab. He grew up with HIDEO KOJIMA's Metal Gear Solid, lives for RPGs, and is waiting for light guns to make their comeback.
Previous post New class and mechanics shown off for Valkyria Chronicles 4
Next post Koei Tecmo lists their top three VR Sense games