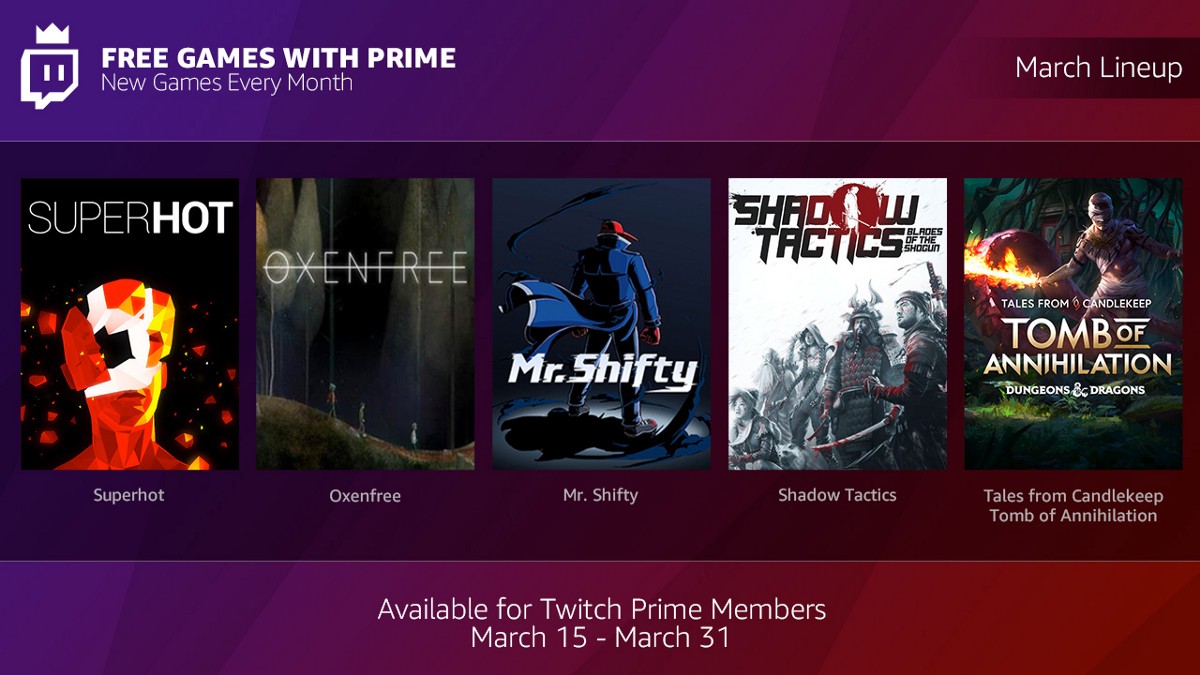 Twitch Prime members may now redeem five PC games, on top of the Devil May Cry HD Collection we shared about earlier this week. The set marks the start of Twitch’s new Free Games with Prime program, operating on a monthly rotation much like PlayStation Plus or Xbox Live Gold.

It’s an impressive line-up too. Headlining the March set is the phenomenal Shadow Tactics: Blades of the Shogun, a hardcore tactical stealth game that will easily please fans of the Commandos series. Joining it is the turn-based dungeon crawler Tales from Candlekeep: Tomb of Annihilation, a title that would spark both recognition (and possibly dread) from the Dungeons & Dragons crowd.

On the other hand, there’s Superhot, a slick first-person action game where time moves only when you do – arguably the closest we’ll ever get to feeling like The Matrix’s Neo. There’s also the supernatural thriller Oxenfree, a graphic adventure that takes plenty of inspiration from ‘80s movies. Wrapping it up is Mr. Shifty, a 2.5D beat-‘em-up played from a top-down perspective, with the titular hero able to make limited, short-range teleports.

(Shadow Tactics: Blades of the Shogun)

All five games may be claimed from the Prime Loot dropdown on Twitch – it’s the crown icon in the upper right corner. Downloading the games requires the Twitch desktop app.

If you aren’t a Twitch Prime subscriber then check our DMC HD post for some related links. In short, you’re already a member if you have Amazon Prime; if you’re not, there’s a 30-day trial as well as a discounted membership fee of S$2.99 thereafter.

We may just see a full-fledged Twitch store in the future. Amazon bought the livestreaming platform for US$970 million in 2014, and while the online retailer has been selling digital video games for years, it’s never been able to generate the same mind share as Steam, GOG.com, and its contemporaries. Since most gamers are already weary or uninterested in having even more launchers, the allure of free, good games helps diminish that initial resistance. And yes, you can buy games on Twitch.

All this is also groundwork for the next generation of customers, the ones that grew up watching Twitch livestreams, or found themselves interested because of it. Yesterday, Twitch broke a concurrent viewer record when popular streamer Tyler “Ninja” Blevins teamed up with the rapper Drake to play Fortnite. More than 635,000 people tuned in for that, perhaps fleetingly or to witness history, but it’s a staggering figure nonetheless.

For now, what’s certain is that Prime members get a monthly supply of games. April’s line-up has been revealed to be Tales from the Borderlands, SteamWorld Dig 2, Kingsway, Tokyo 42, and Dubwars.

Ade thinks there's nothing quite like a good game and a snug headcrab. He grew up with HIDEO KOJIMA's Metal Gear Solid, lives for RPGs, and is waiting for light guns to make their comeback.
Previous post Shadow of the Tomb Raider teased for 14 September
Next post The Crew 2 launches on 29 June 2018, collector’s edition for Asia revealed