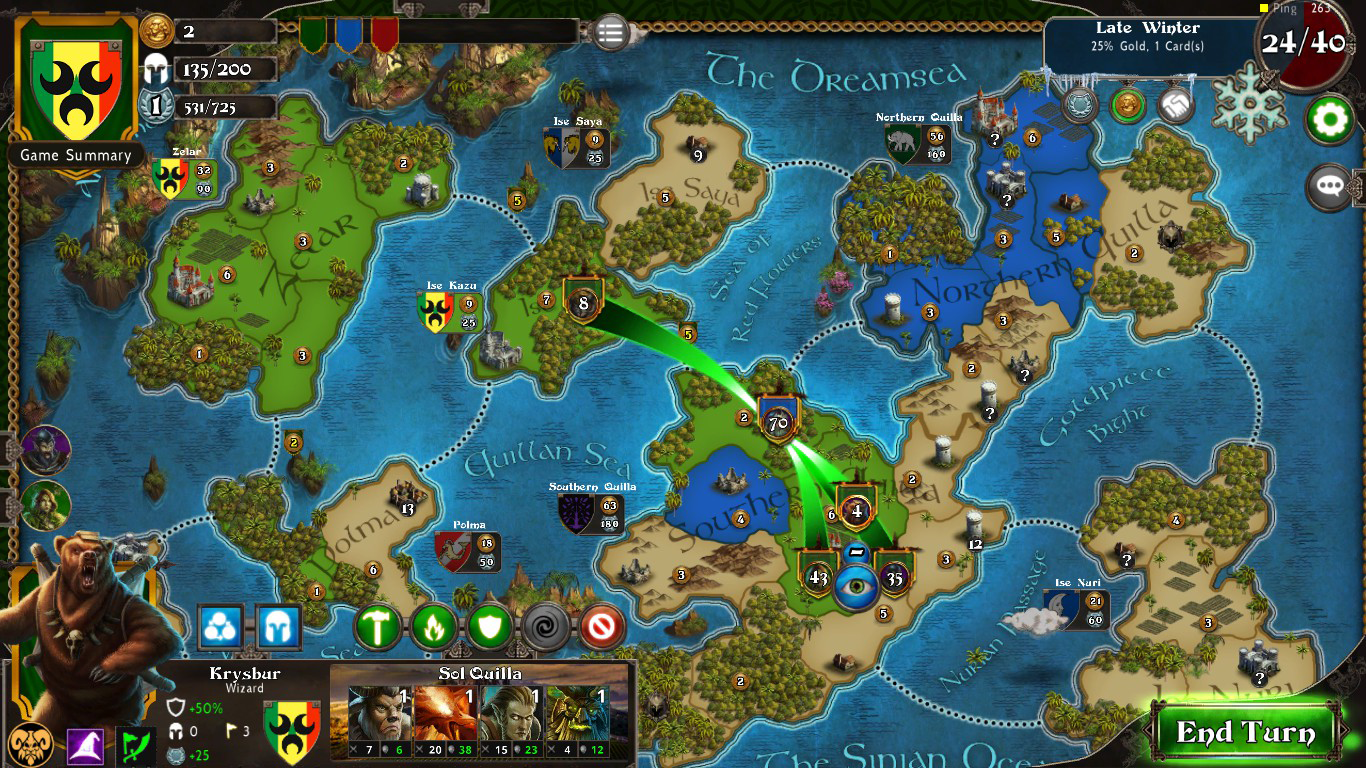 Legends of Callasia is a simultaneous turn-based strategy game blending Sid Meier’s Civilization, Heroes of Might & Magic, and the board game Risk. You will lead fantastical heroes and armies across land and sea, building various improvements on captured territory to fuel your pursuit of world conquest. The maps support up to eight players.

While battles are automated, players are given a hand of disposable cards to help swing the war in their favor. These can range from economic and military bonuses to enemy sabotages, making things less predictable on repeated playthroughs.

For those not familiar with the term, a simultaneous turn-based game simply means all players resolve their actions at the same time. Look to the Ravenmark, Age of Wonders or Sword of the Stars series for examples – even Civilization has it as a multiplayer setting.

Legends of Callasia recently won “Best Multiplayer Game” and “Excellence in Gameplay” at the inaugural International Mobile Gaming Awards (IMGA) Southeast Asia. Boomzap is a virtual studio headquartered in Singapore, with staff working remotely from the region and beyond.

Legends of Callasia operates on an account-based license.

What you’ll download is essentially the free to play version, which is also available on Steam as a demo. This contains the tutorial, starter campaigns, and the four default heroes representing each faction, with three maps for skirmish and multiplayer.

A one-time purchase of US$14.99 (S$22) unlocks the full game – all the heroes, campaign missions and maps – for all available platforms. There are no booster packs, in-game credits, nor play energy to meddle with here.

At the time of publication, you can pick up both Legends of Callasia and The Stoneborne expansion for only S$17.62 on Steam. Otherwise, grab the game from the App Store and Google Play.

If you’re looking for folks to play with, drop by the official Discord channel.

Ade thinks there's nothing quite like a good game and a snug headcrab. He grew up with HIDEO KOJIMA's Metal Gear Solid, lives for RPGs, and is waiting for light guns to make their comeback.
Previous post New Gen 2 ‘baby’ Pokemons available for Pokemon Go now
Next post Original Xbox One bundles reduced to $309 for the holidays