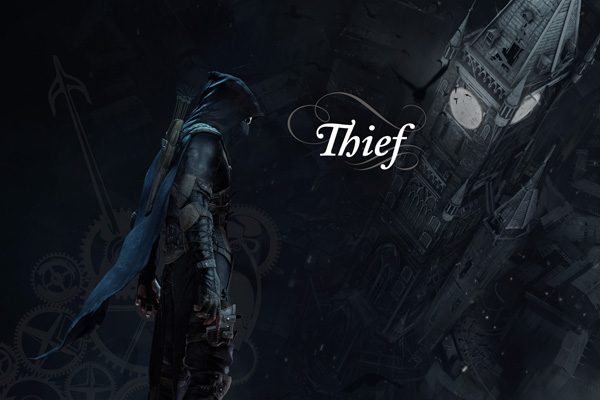 After years of fan speculation, the next Thief game has finally been announced for next-gen consoles and the PC.

Details will only appear in the April issue of Game Informer Magazine, though the cover art has already been shown. Like Tomb Raider, Eidos Montreal and Square Enix are choosing to eschew any use of a subtitle, simply naming the reboot “Thief”. Whether the game will be a sequel or set in an entirely new timeline is anyone’s guess, although Garrett still retains his physique, hood and bow, albeit with a few design changes. According to the press release, the game will be “a reinvention of a franchise” and that the core experience is the fantasy of being the master thief.

Time has moved on. Power has shifted. New greed replaces the old.
But to remain free in The City of chains – that is still the greatest prize.
First I stole to survive… then I survived to steal.
I am one man; I hear your secrets, see your hidden truths.
I am the shadows, the dark and deadly, the velvet night. You will not see me coming.

I am Garrett….What’s yours is mine.

Thief is the third iconic series that the Canadian studio is bringing forward, following in the footsteps of Deus Ex and the just released Tomb Raider. The game premiered in 1998 with Thief: The Dark Project and has since gone on to universal acclaim, considered as one of the pioneers of the stealth genre. Set in a steampunk Victorian age — in a way similar to Dishonored — players take on the role of Garrett as he concerns himself with looting. Other than first-person stealth, the game introduced sound and light mechanics as a means of avoiding conflict. While perfectly capable of defending himself, Garret isn’t an exceptionally skilled fighter, something that hopefully stays in the new iteration. Else it wouldn’t really be a stealth game now, would it?

Thief releases in 2014 for the PC and next-gen consoles. The official website is now up if you’d like to take a look, which thankfully isn’t spelt as “Thi4f” or anything as obnoxious as that. Any thoughts on how this will turn out?

Ade thinks there's nothing quite like a good game and a snug headcrab. He grew up with HIDEO KOJIMA's Metal Gear Solid, lives for RPGs, and is waiting for light guns to make their comeback.
Previous post Willem Dafoe To Star In Quantic Dream's BEYOND: Two Souls
Next post Magicka is Getting a Sequel at GDC 2013