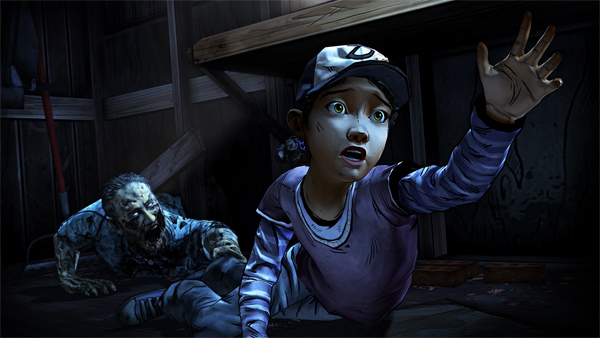 Get your second helping of zombies and feelings with The Walking Dead: Season Two – A Telltale Game Series, set to release later this year for multiple platforms. If dealing with morals and survival as an adult wasn’t enough of a trial, we’ll now get to do so from the perspective of young Clementine.

“The terrifying nature of Robert Kirkman’s world has allowed Telltale to push the boundaries of interactive drama in video games to a place that has had fans anxious to know what will happen next in this series,” said Dan Connors, Co-Founder and CEO of Telltale Games. “Today we can finally lift the veil, albeit only a little, on how this story will continue, and we’ll soon be putting players in the shoes of a lead role that will challenge their expectations of how to survive in a world where no one can be trusted.”

Clementine is an orphaned girl that players first run into after the opening scenes of Season One. The bond between her and the player character, Lee Everett, is quite possibly the focal point throughout those five episodes, serving as a moral compass during those dire situations. While similar in format, The Walking Dead is a different experience to The Wolf Among Us, so don’t go dismissing one for the other.

The Walking Dead: Season Two – A Telltale Game Series will be available for PC, Mac, PlayStation 3, Xbox 360 and iOS during release – other platforms may be announced in the future. The first episode will release before Christmas this year, with subsequent episodes four to six weeks apart. Don’t forget you can carry your save files over from Season One!

If you’re planning to get it on PC or Mac then note that you now can pre-order from Telltale’s Online Store or Steam at a 10% discount, putting it at US$22.49 (SG$28). Pre-ordering through the Telltale store will get you a collector’s DVD at the end of the season for free, although you do have to cover shipping and handling fees.

Ade thinks there's nothing quite like a good game and a snug headcrab. He grew up with HIDEO KOJIMA's Metal Gear Solid, lives for RPGs, and is waiting for light guns to make their comeback.
Previous post Command & Conquer Cancelled, Refunds In the Next Few Days
Next post The New Units in XCOM: Enemy Within – Part I