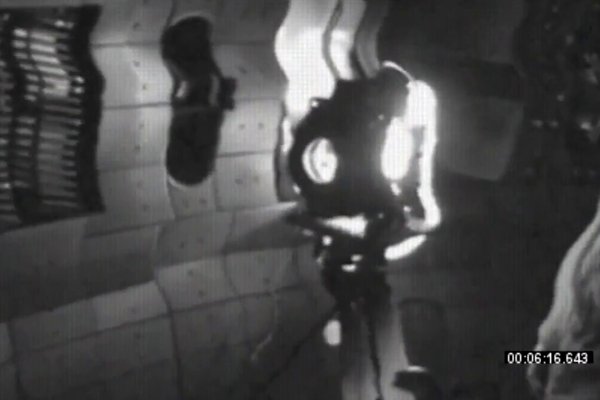 What is that? I’m as clueless as you are but this is just one of many clues in The Phantom Pain’s new teaser video, which is far more mysterious than the Spike VGA trailer ever was.

The Phantom Pain is the supposed project of Moby Dick Studios, a company that conveniently remained a secret up until the Spike debut. Helmed by a Joakim Mogren, fans widely believe that the game is in some way related to Metal Gear Solid: Ground Zeroes, due to several clues surrounding the reveal and “Joakim” being an anagram for “Kojima”, the mind behind MGS.

Just last week we finally got to see a bandaged Joakim Mogren interviewed by Geoff Keighley. Unsurprisingly, Mogren confirmed nothing except for use of the FOX engine, also used in Ground Zeroes.  Apparently we’ll get to see a new trailer at this year’s GDC (Game Developers Conference) which will “answer all of our questions.”

Just a week before the GDCs this video pops up on the internet. It’s not hosted on Moby Dick’s official channel yet so you’ll have to watch it elsewhere on YouTube or on GameTrailers.

The only bit of confirmation that this is remotely related to The Phantom Pain is the following image, which flashes for a split-second around 00:41.

Everything from this point on is conjecture.

Let’s address the image first.  There are enough keywords in there to convince most that this could very well be the first iteration of a VR (Virtual Reality) environment, which supports claims that everything in the debut trailer was not real. Even more interesting is “MME”, which Wikipedia says can either be an enzyme or a hallucinogenic drug.

We all know that Big Boss has gone through a trying gauntlet of missions that have seen him cut up, shot and otherwise injured, both physically and mentally. Phantom pains occur in limbs or body parts not physically there so this VR program seems set on helping with that.

There’s also the very large Omega reference, which just so happens to appear in the Ground Zeroes trailer at 00:29.

The final juicy bit comes from AesopsEpisoden, who pretty much figured out the Morse code playing during the teaser:

Here we get a different interpretation of “MME”.  Everyone knows what memes are these days and Metal Gear is full of these recurring ideas. It even suggests that they work just like genes, propagating information across generations, which sounds like the Les Enfants Terribles project that birthed Solid Snake and his brothers. How that relates to “phantom pain” isn’t clear; then again, almost nothing in this project is certain right now.

The Phantom Pain may actually be a “pilot” for Ground Zeroes, as Kojima has previously expressed interest in the idea. Doing so may serve to test whether the latter really is too “risky” for the current market, as he intends to cover mature themes and taboos. Who’s to say, really? Remember all the pre-release material for Metal Gear Solid 2 and how Raiden suddenly took over? In fact, VR was a strong theme in that game too.

All this sounds conspiratorial so let’s end with a far-fetched but exciting idea: Joakim Mogren is a CG character. The theory popped up on NeoGAF and has erupted into a long debate since, polarising users into two camps. Maybe its happenstance but Kojima and company have a GDC presentation on photorealism and the FOX engine — imagine if that theory was actually true.

Ade thinks there's nothing quite like a good game and a snug headcrab. He grew up with HIDEO KOJIMA's Metal Gear Solid, lives for RPGs, and is waiting for light guns to make their comeback.
Previous post SimCity Patch Addressing Traffic Problems To Be Released
Next post EA Releases List Of Free Games To Say Sorry For SimCity