The New Units in XCOM: Enemy Within – Part II 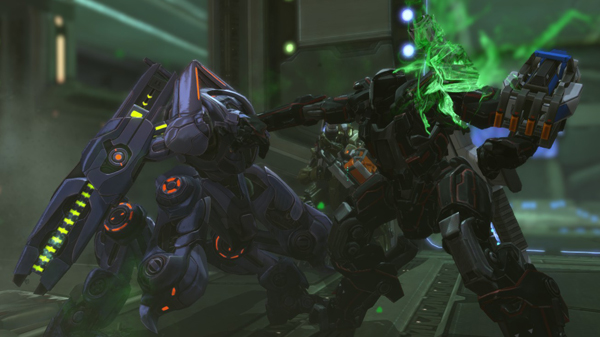 We covered the new additions to the friendly roster in Part I last week. Fun as they sound, it just wouldn’t be an XCOM game if the enemy didn’t get their own batch of shiny new toys to rain death and destruction with. It’s time to take a look at the opposition in XCOM: Enemy Within and how to deal with these newcomers. Remember: a dead alien isn’t a scary alien.

*A quick note that some of the older aliens have had some changes but what those are will not be touched upon here.

Sectoids are just adorable little buggers, aren’t they? Scampering around the map with their wrist-mounted Plasma Pistols and their Mind Merge tricks, these grunts of the invasion usually end up being target practice before getting replaced by their meatier cousins.

Well not anymore! Tired of simply being drops for weapon fragments, you’ll find that Sectoids will be accompanied by a Mechtoid midway through the game. Armed with two Plasma Mini-Cannons and a copious amount of health points, a Mechtoid can easily shred cover and troopers alike by firing twice in a single turn, provided it doesn’t move. Should a Sectoid successfully Mind Merge with one, the Mechtoid gets a Psi Shield that provides another 6 HP and reduces any incoming damage. That’s quite a bit of work ahead of you.

1: Get into cover within Mechtoid’s visual range

Giving it more targets to shoot at lessens the likelihood of a soldier going down in a single turn. Besides, at that point in the game you’d have Mutons or Cyberdiscs lurking elsewhere, and the last thing you want is to trigger them by running all over the place.

These critters can be killed in a single shot and they know it (unless Second Wave options mock you with a low damage roll). The AI for Sectoids prioritizes cover above else, sometimes going further away from your squad. It’s a mild annoyance but also a sure bet that they’re going to Mind Merge with that Mechtoid. Try to deal with them with your Assault or Sniper classes but don’t push it. Sometimes it’s just best to whittle away at that Psi Shield with patience and firepower.

3: Smack it with your MEC Trooper

You’ll definitely have one by the time you run into Mechtoids, so leave the scouting to the Recruits/Assaults and have your MEC Trooper stick with the squad. Once you’ve taken care of the shield and lowered the Mechtoid’s health to approximately half, get your own hulk of metal to move in and finish the job with a Kinetic Strike a.k.a. Rocket Punch. It’s possible to ignore the smaller targets and kill the Mechtoid in a single turn if the opportunity presents itself; you’ll get to do just that once Kinetic Strike is upgraded to deal 15 damage instead.

3B: Do it the old-fashioned way

If you went with the situation-dependent Flamethrower instead, fret not. Keep your MEC Trooper in good cover and treat the enemy like you would a Muton Elite. An Assault with Rapid Fire (take two shots at a single target), a Sniper with Headshot (higher critical chance and damage) or a Heavy with Bullet Swarm (fire primary weapon for both actions) is supremely effective. Or get another MEC Trooper.

The real threat isn’t so much the Mechtoid itself, but the posse of other big and nasty aliens to shoot at. Prioritize your targets and exercise other tactical options like grenades, a Shredder Rocket (enemies hit take 33% more damage) or even just falling back if things look grim. A mobile Mechtoid only gets to fire once! Meeting an invisible, tentacled alien whose sole purpose in life is to strangle lone souls is truly an exciting proposition for any new recruit. Oh and that time will come, for Seekers appear fairly early in the campaign.

While usually found as a pair, these floating terrors (from the deep?) immediately cloak and hide upon discovery. Seekers operate individually, choosing to prey on soldiers who are alone and pre-occupied with fighting something else. Anybody unfortunate enough to be Strangled will be paralysed and continue to lose health every turn, until either the Seeker dislodges itself or is destroyed. The traumatised survivor will then need a turn to catch their breath, moving only 1 tile. Frankly I’m surprised they don’t just run back to the Skyranger or spend another turn vomiting, but that’s Earth’s best defenders for you.

Seekers were designed specifically to harass soldiers who liked being static, making Snipers a choice target. As Seeker camouflage wears off over time, a mobile force will eventually find one (or both!) stalking a squad member. They’re not hard to kill though it will take half the squad if you’re using low-tier weapons… and they don’t miss. I’ve seen an entire squad inside a kitchen hit everything but a single Seeker, so don’t get too complacent.

Moving might not be the best solution, much to that Sectopod’s dismay. Bizarrely, a simple technique would be to have your squad close ranks and keep on Overwatch. This won’t be practical once your Sniper gains Squadsight so bear that in mind and keep the separation short. In practice, however, I’m usually able to lure the Seeker onto a victim and have my Assault class promptly blow it apart. Eventually you can build Respirators to counter the Strangle effect (never used one) whereas some late-game armour come with the feature built in.

Naturally, the best course of prevention is detection. Seekers can’t use Strangle once visible but do have access to a plasma weapon, so again, don’t get complacent. I tried to be cheap by manually scanning movement tiles for invisible objects, but that doesn’t work since Seekers can share a tile-space. Surprisingly they’re immune to Flamethrowers, so the good old adage of “spray and pray” doesn’t work either. What you can do is use the Sniper’s Battle Scanner or the Bioelectric Skin gene mod, both of which detect enemies.

Since you literally know if there’s a Seeker in the area beforehand, the element of surprise Firaxis Games were going for is highly diminished. Missions proceed as normal until Seekers pop into view, at which point they dramatically swirl around before cloaking and, after a few turns, dying. It gets tense during Civilian Rescue missions to be sure, but otherwise they turned out disappointing.

Don’t go trying to capture one by the way; Seekers are a mechanised unit.

So just how do the EXALT fare once they’re on genetic modifications and energy weapons? Not much different, to be honest. Compared to the aliens you’ll be facing at that point in the game, the EXALT don’t offer too much of a threat either. Add to the fact that your own squad are now rocking some serious firepower and it quickly becomes clear that these guys don’t learn from their early failures. Maybe it’s because nobody returned to report about it.

The swarming effect quickly wore off once I discovered that EXALT troops didn’t merge into a platoon. Tactically they always operate as squads, meaning that tackling them one-by-one becomes a methodical killing affair you’d be well familiar with. Every now and then a hidden squad surprises me but that has more to do with spawn points than planned ambushes.

Giving them abilities and better weapons simply means you won’t stomp all over their forces, although the Sniper and MEC Trooper might have something to say about that. The EXALT are still a welcome break from the alien invasion; just don’t expect them to steal the limelight for long.

XCOM: Enemy Within releases later this week on 15 November, for the PC, PlayStation 3 and Xbox 360. You’ll get fun missions like this one:

Ade thinks there's nothing quite like a good game and a snug headcrab. He grew up with HIDEO KOJIMA's Metal Gear Solid, lives for RPGs, and is waiting for light guns to make their comeback.
Previous post Singapore Gets New PlayStation Vita on 14 November, Priced SG$299
Next post PlayStation 4 Ready For HK/SG On December 17