Home / Latest / Games / The New Units in XCOM: Enemy Within – Part I

The New Units in XCOM: Enemy Within – Part I 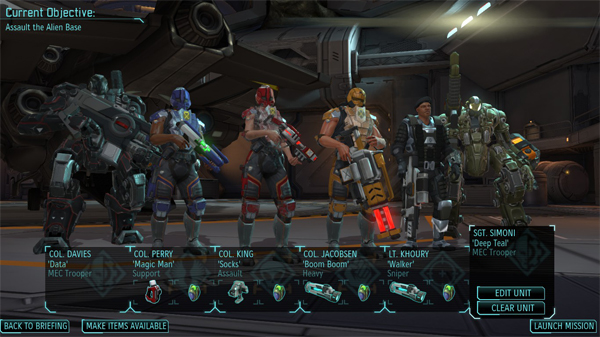 After sinking a good chunk of time into the preview build of XCOM: Enemy Within, it’s time to take a look at the new units you’ll encounter when the expansion goes live in mid-November. The death tally has risen to seven so far, so make good use of the intel contained herein. The first part will deal with XCOM units, while part two will cover the aliens.

The advancements in XCOM technology has been brought about entirely due to Meld, so it’s worth a section here. Meld is described as a crystalline suspension “containing billions of cybernetic nanomachines – each made up of both organic and mechanical components.” Naturally, both Dr. Vahlen and Dr. Shen have their own ideas of what to use it for, thus the introduction of the Genetics and Cybernetics labs respectively.

Two canisters of these (each grant 10 Meld) can be found during most alien encounters, barring EXALT and scripted missions. Each is rigged to explode following their own timers, regardless of you discovering them. These canisters provide high cover but can explode, so it’s best to recover the Meld and move away within the same turn.

You don’t have to recklessly charge in to find them, just make your squad leapfrog a bit wider. The canisters aren’t placed at extreme ends of the map either, and if you’re close enough you’ll get a directional indicator similar to locating enemies.

Any remaining MELD will be automatically collected if you complete the mission in time.

Gene mods are available to every class except MEC Troopers once you’ve built the Genetics Lab (counts as a laboratory for adjacency bonuses). The mods are the same across the board but to unlock them you’ll have to conduct autopsies on different aliens. You can swap modifications freely (to the soldier’s horror, most probably) but these cost money and Meld, so it’s best to be decisive. The lab accepts a maximum of three candidates at any one time, with each gene mod taking three days to complete. For example, getting a Chest and Skin mod will take a total of six days.

There’s no reason not to give your better soldiers gene mods as these bonuses stack with your class abilities to allow for some amazing combinations. Give Mimetic Skin (soldiers ending their turn in high cover will be invisible) to a sniper with Low Profile (make partial cover count as full) and you literally have a stealth sniper slinking around the map even before you unlock the late-game Ghost Armour. It definitely changes the game’s dynamics mid-way through the campaign.

I’ve heard there’s a Second Wave option where gene modded soldiers won’t be eligible for psionic development but I haven’t been able to confirm this via the game yet.

Requiring the Cybernetics Lab (workshop for adjacency bonus), the journey to MEC Trooper fun begins with a soldier of at least Squaddie rank going through augmentation. The process takes three days and strips him or her of any previous gene mods and class abilities, but it does grant you a new tech tree and access to a unit that can really soak up some damage.

There is some semblance of the soldier’s past in their new life as a MEC Trooper. Each gets a bonus ability that’s determined by their previous specialisation, such as with “Data” in the above image. His former training as an Assault class grants him Shock-Absorbent Armor, reducing damage by enemies within four tiles away by 33%. Combine that with a Kinetic Strike arm module – it’s that or the Flamethrower – and you’d have a close-combat force to be reckoned with. Try greeting a few Chryssalids or Mechtoids with that left hand.

MEC Troopers can equip different equipment too. The first would be the MEC itself, which comes in three variants that become available after requisite research. The other would be weapons, beginning with the Minigun leading up to the Particle Cannon. While huge they function similarly to the Assault Rifle, so there’s no suppression or sniper-like precision to be found here. Tech tree upgrades can add accessories like a Grenade Launcher or Restorative Mist for area-of-effect healing. Speaking of healing, MEC Troopers benefit from Medikits like everyone else.

Before you augment everyone in your squad, however, keep in mind that these folks cannot carry infantry equipment such as the Arc Thrower and will not be eligible for the Psionics Lab. One can’t have everything, unfortunately.

In Part II we’ll take a look at the new alien units and their tactics, as well as revisit the EXALT’s performance at the later stages of the game.

Ade thinks there's nothing quite like a good game and a snug headcrab. He grew up with HIDEO KOJIMA's Metal Gear Solid, lives for RPGs, and is waiting for light guns to make their comeback.
Previous post The Walking Dead: Season Two Gets More Clementine
Next post Heavenly Sword Returns as CGI Movie